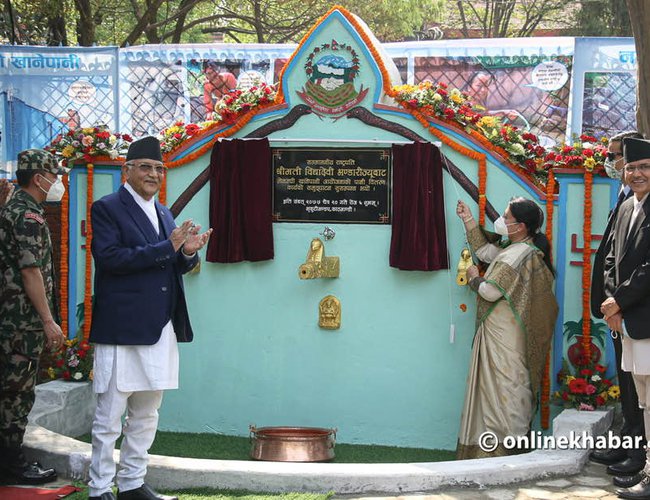 Waiting for 30 years, Kathmandu’s residents celebrated the inaugural of Melamchi Drinking Water Project as a day for jubilation. Having paid a heavy price for drinking water for so long before, people took the beginning of water supply from their tap as matter of joy.

Following the inauguration of the project by President Bidhya Devi Bhandari, materializing the dream of bringing the water of Melamchi to Kathmandu, there was satisfaction among development partners as well.

Japanese government shared this jubilation with people of Kathmandu, sending high level representatives at the inaugural ceremony of Melamchi Drinking Water Project and showing solidarity with government and people of Nepal.

“The Government of Japan is pleased with the successful completion of the Melamchi Water Supply Project, the national pride project of Nepal that will distribute safe drinking water to the residents of Kathmandu Valley,” said a press statement issued by Embassy of Japan.

From the embassy, the Deputy Chief of the Mission was present in the ceremony. The representation of Japan at the inaugural program was another important milestone. Japan has been providing support to Nepal through JICA to improve access to drinking water in the country.

The Water Treatment Plant (WTP) in Sundarijal is a crucial component of the overall project and it was funded by Japan. Japan provided loan assistance of around 5,494 million Japanese Yen (equivalent to NPR 5,806 million) for the construction of the plant. The Government of Japan signed an E/N on this loan with the Government of Nepal in March, 2001 and the construction was completed in December, 2017.

The Plant has the capacity to purify 85 million liters per day, making clean water available for Kathmandu residents to keep in water tanks in their homes, or the communal wells when they need.

The Embassy of Japan in Nepal hopes the clean water from the Melamchi River will contribute to better health, improving daily lives and upgrading the standards of living of Kathmanduites. “We hope that the successful completion of the project will further strengthen the relationship between Japan and Nepal, and the friendship of people in the two countries.”

JICA has been one of the major development partners of GoN to implement the Melamchi Water Supply Project by constructing the 85 MLD (million litter par day) Water Treatment Plant (WTP) at Sundarijal.

Since March 2001,with signing of the Loan Agreement amounting to 5.49 billion JPY between the Government of Nepal and JBIC to construct the WTP, the project faced several disruptions until it was substantially completed in December 2017. Even after its substantial completion, the WTP had been waiting for the water from Melamchi diversion tunnel for its full operation.

The Water Treatment Plant is the largest in the country equipped with modern technology and database system. Components like SCADA system are some of the salient features of the WTP.

Completion of major infrastructure of the project would bring additional 170 MLD water to Kathmandu valley. Since current supply of water is considered 91 MLD in average considering the loss, the Melamchi Project will dramatically improve water supply in Kathmandu Valley, fulfilling the huge gap of water supply services provided by the Kathmandu Upatyaka Khanepani Limited (KUKL), the sole water utility of the capital city.