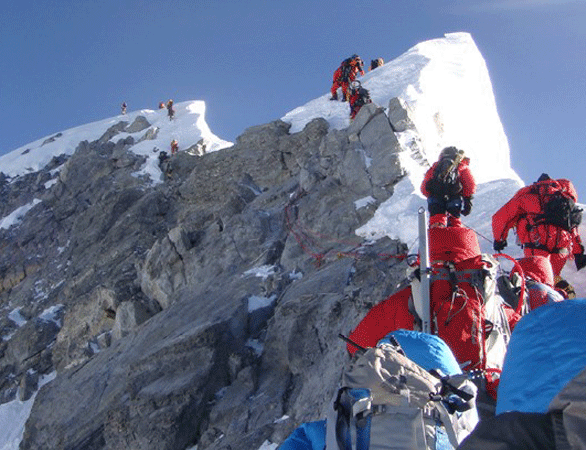 A team of father and son from Nepal scaled the highest mountain in the world-Sagarmatha (Mt Everest) this morning reports RSS.

Sonam Sherpa, 16, and his father Purna Kumar (PK) Sherpa, of Maiwakhola Rural Municipality-4 in Taplejung district, reached the top of the 8,848.86-metres mountain at 8:50 am today, according to the Himalayan Guides Nepal Treks and Expedition Pvt Ltd, which had facilitated them for the expedition.

Himalayan Guides’ manager Ishwori Pokharel shared that Sonam had reached the Everest Camp a month ago for the arrangement of the expedition while his father followed him towards the end of April.

For some time, there was no fair weather for the summit which gave the father-son duo ample time to acclimatize themselves and rest at the Everest Base Camp.

With the weather improving, they resumed their summit bid and set their feet atop the Sagarmatha this morning, confirmed the Department of Tourism’s Mira Acharya.

Acharya shared, “We have received information from the higher camps of Sagarmatha about the successful ascent of the father and son today morning. Once the expedition report is provided, we will verify and accredit once proven of their successful ascent,” said Acharya from Everest Base Camp.

According to her, Sonam would be the youngest person to climb Sagarmatha from the south-east ridge (from the Nepal side). However, she said that there was no possibility of granting the permit for the Everest expedition for a person below 16 years.

The rule in Nepal dictates that those below 16 years are not granted permission for the Everest expedition.

The record of youngest Nepali climber in Nepal is unbroken till date since Temba Tsheri Sherpa of Dolakha district set the record on May 23, 2001 when he was 16 years and 14 days RSS reports.

OTHER COMMISSIONS: In The haze By Keshab Poudel 5 hours, 13 minutes ago