Despite Very Good Bilateral Relations Between Nepal And Israel Nepal Has Been Voting Against Israel In Almost All Political Issues: Ambassador Goder

Despite Very Good Bilateral Relations Between Nepal And Israel Nepal Has Been Voting Against Israel In Almost All Political Issues: Ambassador Goder 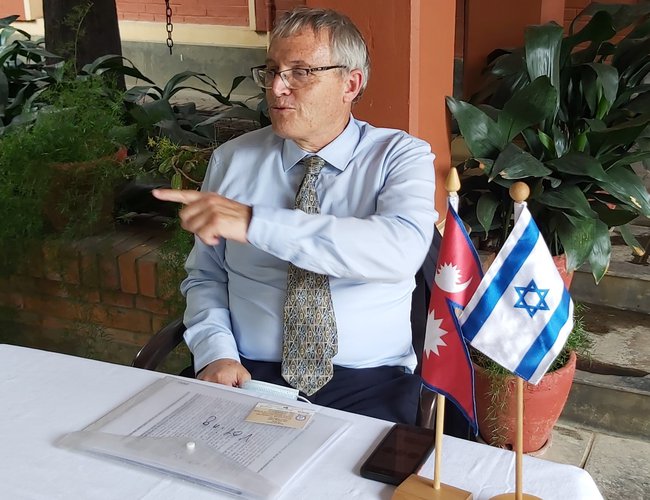 Ambassador to Israel to Nepal Hanan Goder said that despite very good bilateral relations between Nepal and Israel Nepal has been voting against Israel in almost all political issues.

“And we are very, very happy with the bilateral relations. However, relations have a second leg. And the second leg is multilateral relations. Multilateral relations are expressed in terms of voting in the UN in New York and in Geneva. I have a UN card of votes from Nepal in New York and Geneva. When I see it, I find Nepal is voting against Israel on almost all political issues. And how I can say we have good multilateral relations. Only in 2018, 2019 and 2020 stayed absent in an issue, and we are happy for seeing Nepal is changing its positions. When I raise issues with the concerned ministry here, they say Nepal is gradually changing its positions in favor of Israel but, I see, the way Nepal has been voting in the UN in issues relating to Israel will take over eight decades for Nepal to have a neutral position on Israel!”

He said that the bilateral relations are on agriculture, tourism, aid, workers/caregivers, investment and other similar aspects of cooperation. “As we have had all this cooperation, bilateral relations between the two countries are very good and cordial, and they are growing every year," said ambassador Goder in his interview.

“As part of bilateral cooperation, we have 'Learn and Earn' program in which about 500 Nepali farmers go to Israel every year. Nepal has one of the biggest shares in this program. We take 4,000 students from 40 countries. I am the one that entered Nepal into this program. I want to see more job opportunities for Nepalis in Israel. I also want to have construction workers and workers in tourism in Israel from Nepal. We also have scholarship programs and foreign employment ones.”

“Nepal is a beautiful country, people are honest and beautiful, and many Israelis love to come here for tourism, volunteer works. We have good people-to-people contact. Despite all this, multilateral relations also have an effect on bilateral ones.” “Unfortunately, multilateral relations are not going ahead as expected. As I said earlier, relations have two legs, if only one leg is moving ahead and the other one is lagging behind, you cannot move much ahead.”

Replying to a query on possible medical support of Israel, ambassador Goder said,” of course, we care about what is happening here due to COVID-19. We did our best by providing medical supplies to Nepal in the first wave. Even now, Israel is providing ventilators, oxygen concentrators and other medical supplies. Besides government, private companies and other organizations are also collecting humanitarian aid to send here in Nepal, as people-to-people contact between Nepal and Israel is also very good.

In his reply on Nepal’s future, Ambassador Goder said that Nepal is an amazing country in its beauty and even more because of its people.

In a recent conflict in Gaza, Ambassador Goder said that Israel has no interest in attacking the civilian population. “Israel is where Israel is and Gaza is where Gaza is, yesterday, today and tomorrow! Do you think if we kill a thousand children, it will bring peace? No way. On the contrary, it will only brew more hatred. Let me repeat, Israel has no interest to attack civilians, we target the terrorists. The Hamas target civilians or make it their base of attack. So they have photos of people suffering and the media makes the report on them. This is a cynical way of terrorists that are playing with human lives. The world recognizes Hamas as a terror organization. You read it, you see it, and you also know what Hamas claims to be. “

EP DELEGATION Visit For Cause By A Correspondent 2 days, 7 hours ago