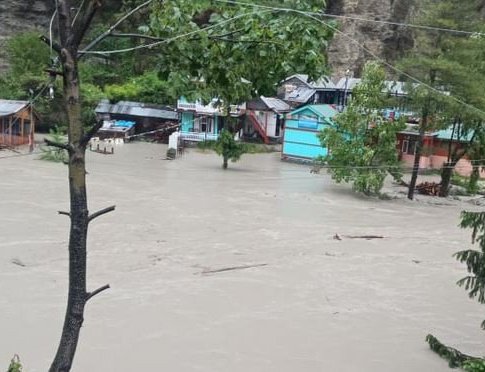 With the monsoon entering Nepal with heavy rains, major rivers and their streams have swollen, causing floods and inundations in many regions.

According to Meteorological Forecasting Division (MFD) due to the low pressures area developed in Jharkhand, India, and the monsoon turf is close to Nepal, more rain will likely occur few more days.

According to Manju Basi, a meteorologist at the Division, there is a possibility of light to moderate rain in many parts of Nepal during the day and night and heavy rain in some parts of Gandaki, Lumbini and Bagmati Provinces and very heavy rain in a few places in the coming 24 hours," Basi said.

The Division has issued a flood forecast bulletin on the risk of floods from Tuesday to Thursday.

According to the bulletin, the flow of the Kaligandaki, Tinau, Paschimrapti, Babai, Bheri and its tributaries, including Gandaki, Lumbini, Karnali, Chure and some small rivers flowing through the Terai is likely to increase in the next three days.

However, Manang district was worst hit by the floods on Tuesday. Over 100 houses were displaced because of floods in the Himalayan district.

Flooding caused by incessant rainfall has inundated 60 houses of Chamebazaar and 48 of Taalgaun in Naso Rural Municipality of the district.

Taalgaun, which in Naso Rural Municipality-1, got inundated due to the continuous rainfall from Sunday.

Meanwhile, a landslide triggered by heavy rains has affected people's lives in Syangja and has increased the risk there. Eleven households have been displaced by the floods in the district.

A house has been displaced due to landslides in Arjun Chaupari village and rural roads have been blocked in some places. Dozers have been used to clear the debris.

Similarly, the Sanphe-Martadi highway has been blocked in Bajura due to incessant rains for the past three days.

Likewise, an alert message has been issued to avoid floods as there has been heavy rain for six hours in Bharatpur, Rampur and other areas in Chitwan.

People of over a hundred houses in the Manang district have been displaced as floods triggered by the incessant rainfall entered their houses.

Some 60 houses of Chame bazar, the district headquarters, and 48 houses of Tal Gaun of Naso Rural Municipality have been flooded as the water flow in the Marsyangdi river has swollen due to the incessant rainfall since Monday.

Bishnu Lamichhane, Chief District Officer of Manang, said that some 300 people of the Bazar area were shifted to the newly built building of the district.

.Nepal Police and Nepali Army personnel have been mobilized to rescue the people and carry luggage to safer places..

All 48 houses of Tal Gaun in Naso Rural Municipality have been inundated. Flood water has submerged as much as the first floor of some 25 houses. The people are said to be taking shelter at Sirantal, Myardi area.