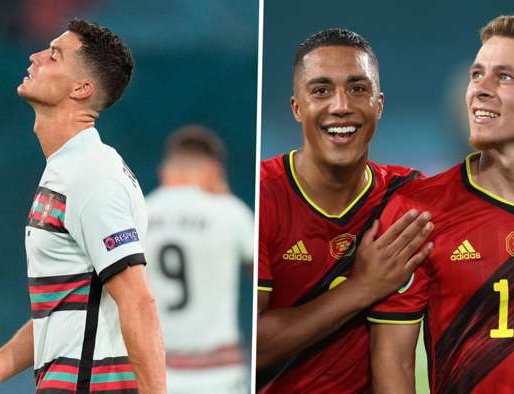 Two tournament favorite teams Portual and The Netharlands trenched by their rival in knockout round of match of European Championship 2020. In a thrilling match, Belgium defeats Portugal 1-0 and The Netherlands lost to Czech Republic with 0-2.

Sleeves rolled up and dropping deep into midfield, it was clear during the second half in Seville that Cristiano Ronaldo meant business.

He had fed off scraps during the opening 45 minutes of Portugal's heavyweight last-16 clash against Belgium, and with the defending champions 1-0 down and facing elimination, the Seleccao captain had had enough of waiting for his team-mates to create something for him.

All thoughts of this being a potentially record-breaking night had gone. For all Ronaldo is labelled as an egotist who puts his own achievements ahead of those of the team, when playing for his country at major tournaments, only winning matters to the 36-year-old star.

Despite some flashes, though, he could not conjure the old magic that led him to become one of the greatest players the world has ever seen. Portugal's defence of their title is over, and so might be Ronaldo's European Championship career.

We should not, of course, rule out a 39-year-old Ronaldo making it to Germany in 2024. Nothing should ever be ruled out when it comes to Ronaldo.

And given the relative whimper with which Portugal bowed out here, the five-time Ballon d'Or winner may well fancy one last shot at continental glory, particularly if he fails in his quest for a World Cup winners' medal at Qatar 2022.

For now, though, Ronaldo and his Portugal team-mates will reflect on a night when, despite the quality of the players in the Belgium team, the game was there for them to win.

Despite this being a night where Ronaldo was sharing a pitch with the likes of Kevin De Bruyne, Eden Hazard and Romelu Lukaku, this was a match that lacked in quality and ended up being defined as much by its stop-start nature as tempers flared as anything else.

The one true bit of quality came from Belgium three minutes before half-time, as first Lukaku showed superb strength to hold the ball up under pressure from Ruben Dias before the ball was recycled to Thorgan Hazard around 25 yards from goal.

The Borussia Dortmund winger's effort dipped and swerved, but Portugal goalkeeper Rui Patricio will likely reflect on it being a shot that nestled into the middle of his goal, rather than in either corner.

Hazard's goal lit up a first 45 minutes that otherwise was poor at best, with only some strong runs through midfield from Renato Sanches and a solid save from Thibaut Courtois to deny Ronaldo from a free-kick enough to bring the small crowd at Estadio La Cartuja to life.

The game clearly needed a goal as both sides largely sat back, but the chances of the quality being improved after the half-time were hit somewhat by the sight of De Bruyne hobbling off just 90 seconds after the break having been scythed down by Joao Palhinha in first-half stoppage time.

His potential absence, as well as that of Eden Hazard, who limped off clutching his hamstring late on, will be a concern for Roberto Martinez ahead of Friday's quarter-final with Italy, but he will be proud of how his team held out under increasing Portuguese pressure.

Ronaldo dropping deeper and then moving out wide allowed space for others to try their luck, but they could not find a way through despite a frantic final 10 minutes or so.

Diogo Jota sliced a shot over the bar when well placed, Courtois stood firm to palm away a point-blank header from Dias before Raphael Guerreiro hit the post from the edge of the penalty area.

Joao Felix, introduced from the bench for his first appearance of the tournament, spurned the final opportunity in stoppage-time as he fired wide when well placed.

Ronaldo Tielemans Euro 2020 Portugal BelgiumPerhaps Portugal will reflect on their final group game with France when, with the score 2-2 entering five minutes of injury time and Germany's game with Hungary over, they chose to sit back rather than go for the win.

A defeat would not have changed their destiny, but going for the victory could have rewarded them with a last-16 meeting with Switzerland, rather than having to face a Belgium side whose 'Golden Generation' are as hungry for success as Ronaldo has ever been.

It is the Red Devils who march on then, with Ronaldo able only to slump towards the turf at full-time and slam his captain's armband down in front of him.

The record for most international goals by a male player will have to wait, his chance to surpass Ali Daei on the biggest stage gone. Doing so in World Cup qualifiers in September is unlikely to have quite the same impact as it would have done this summer.

And though he could still earn himself a Golden Boot from this tournament as he departs as its top goalscorer with five, he will not be getting his hands on the biggest prize this time around.

At his first European Championship, Ronaldo ended the tournament in tears as Portugal were beaten in the final by Greece.

There was not the same emotion at what could prove to be his last, but that does not mean he will be any less disappointed with the outcome.

The defender saw red just moments after Donyell Malen had missed a chance to give the Dutch the lead, allowing Czech Republic to run out 2-0 winners

Frank de Boer had a clear image of what a successful Euro 2020 would look like for the Netherlands, and crashing out at the hands of the Czech Republic in the last 16 certainly was not it.

A disastrous 28 seconds early in the second half all-but condemned them to defeat in Budapest, with the Oranje's dream of lifting a first major trophy in 33 years ruined in the Hungarian capital.

The chaotic but entertaining manner in which they had topped Group C with a perfect record had prompted hope that, after missing out on even qualifying for last two tournaments, the Netherlands were back.

But at the first sign of coming up against any real threat, their limitations were exposed.

What had been an even game was blown wide open around 10 minutes after half-time.

Donyell Malen found himself with the freedom of the final third, only to fail with an attempted step-over as he looked to round Tomas Vaclik rather than take an early shot, which in turn allowed the Czech goalkeeper to smother the ball at his feet.

Exactly 27.92 seconds later, Matthijs de Ligt could only scoop the ball back with his hand as he slipped when attempting to stop Patrik Schick from having a similar opportunity at the other end.

Though referee Sergei Karasev needed to consult his pitchside monitor to come to the right decision, there was no doubt that De Ligt's moment of madness was deserving of a red card.

From there the dye was cast, and the Czechs ran out deserving 2-0 winners to book a quarter-final meeting with Denmark in Baku on Saturday. 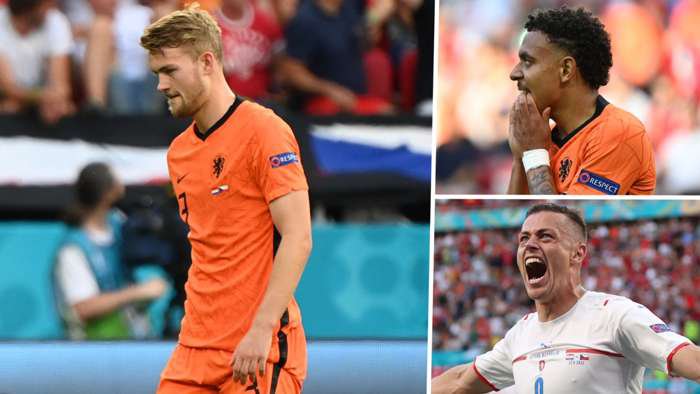 Former Manchester United striker Ruud van Nistelrooy, who is now part of the Dutch coaching staff, had warned De Boer's players against complacency ahead of the game, but it did not appear that his message had got through.

There was a certain arrogance to their performance that suggested they believed they were already through, and potentially plotting a route to the final through what is, in no uncertain terms, the more favourable side of the draw

But for all that exciting attacking we saw in the group stages, the Netherlands failed to record a single shot on target here, the first time they had failed to do so in a game since November 2013 versus Colombia.

Denzel Dumfries - who will no doubt secure himself a big move this summer after his eye-catching tournament performances from wing-back - looked lively, as did Malen alongside Memphis Depay, but the Dutch flattered to deceive and did nothing to threaten Vaclik.

And while it is easy to criticise the Netherlands for their underwhelming display, credit should also go to a Czech Republic team who were well organised in defence and both compact and effecient on the counterattack.

For all their stellar names, De Boer's side did not have the quality or energy required to break them down.

"It was a poor display by the Netherlands. There was a lack of intensity, aggression and mentality,” former Netherlands midfielder Nigel de Jong said on ITV, and he was right.

Tomas Kalas and Ondrej Celutska were a wall at the back, and Tomas Holes won the battle in midfield against a disappointing Georginio Wijnaldum, who completed just 10 passes throughout the whole 90 minutes.

That this Netherlands side have only won once on the last six occasions they have fallen behind is telling, and not for the first time in this competition, De Boer's substitutions were head-scratching to put it lightly.

De Ligt’s red card should have inspired them to dig in and push for a goal, but their heads went down as the Juventus star exited the scene, and from there it seemed inevitable the Czechs would take the lead.

Their first came from the head of Tomas Holes after Kalas had nodded a free-kick back across the face of goal, before a well-worked move was finished off by Schick to seal the result with 10 minutes left on the clock.

And so while the Czech Republic partied with their fans at the Puskas Arena, the Dutch and their own 7,000 supporters were left deflated once more.

How they must rue that 28 seconds of madness.

South Korea Reaches To Knockout Round Defeating Portugal By Agencies 2 days, 13 hours ago

World Cup 2022: Australia Advanced To The Round Of 16 By NEW SPOTLIGHT ONLINE 4 days, 5 hours ago

US Defeats Iran Reaching Quarterfinal Of World Cup 2022 By Agencies 5 days, 13 hours ago