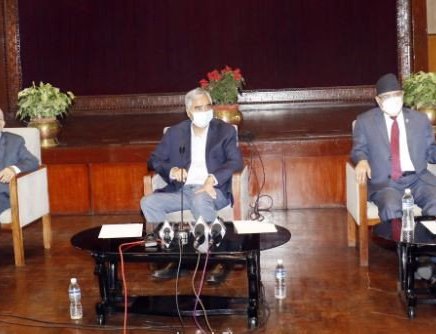 Nepali Congress President Sher Bahadur Deuba has expressed the confidence that the decision in the ongoing case on dissolution of the House of Representatives would be one that would enhance the respect of independent judiciary.

Speaking at an interaction held by the agitating parties with intellectuals and professionals here today, he said the court should deliver its verdict without coming under the pressure and influence of any side.

CPN (Maoist Centre) Chair Pushpa Kamal Dahal 'Prachanda' said the current alliance's only aim was to defend democracy, constitution and national freedom. Protecting the constitution, constitutionalism, democratic norms and values and national independence is the need of the day.

Likewise, former Prime Minister Madhav Kumar Nepal said the agenda of the alliance is not personality oriented but a fight to preserve democracy and constitution, and maintain rule of law and good governance in the country.

Janata Samajbadi party leader Ashok Kumar Rai said the alliance will continue to exist until the need for it is relevant while Rastriya Janamorcha leader Durga Poudel said nobody could break the alliance that is united for the Constitution and democratic norms and values.