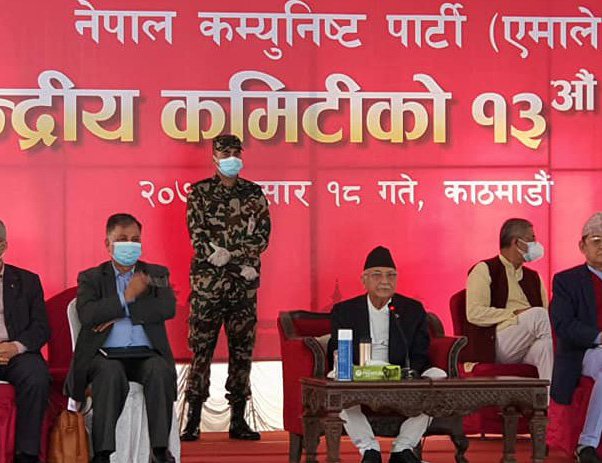 Prime Minister and CPN (UML) Chairperson KP Sharma Oli has urged the party lawmakers of the dissolved House of Representatives to withdraw the signatures they gave in a proposal to make Nepali Congress President Sher Bahadur Deuba the Prime Minister.

In the Friday Central Committee meeting of the party, Chair Oli requested the leaders including Madhav Kumar Nepal to withdraw their signatures as per the need of party unity and country’s necessity as well as to be active in party activities, saying it is unfortunate to sign against the prime minister of own party and in favour of the opposition party leader.

Chair Oli also asked them to withdraw their signatures within Monday.

Similarly, he urged Vice-Chairperson Bamdev Gautam to play special role to unite the party. A total of 23 outgoing lawmakers of CPN (UML) including leader Nepal had signed the writ petition against dissolution of House of Representatives filed at Supreme Court, participating in the opposition alliance.

Participating in the meeting, Vice-Chairperson Gautam, who remained independent over party dispute, assured of taking initiative to make the party united.

The meeting has decided to call for resolving the intraparty disputes. According to spokesperson Pradeep Kumar Gyawali, the meeting also passed the proposal of extending congratulations to Communist Party of China (CPC) on its 100th establishment day and achievements of the people and the country.

However, senior leaders Madhav Kumar Nepal and Jhalnath Khanal-led faction leaders were absent in the meeting.