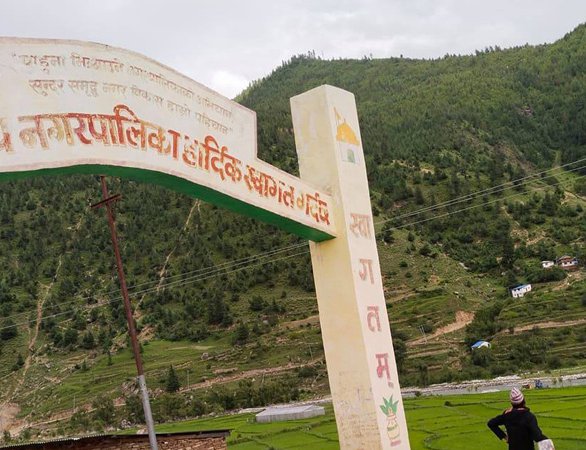 Even to this day, several parts of Karnali province, including Jumla, lack proper access to electricity. Power outages are frequent and the district isn’t connected to the national grid. However, locals are finally hoping to see the light at the end of the tunnel with the national transmission line finally reaching Jumla.

For a long time, residents of Khalanga, Jumla’s headquarters, have been deprived of electricity.

Currently, Khalanga is facing acute shortage of electricity as the 200-kilowatt Ghughuti Hydroelectric Plant set up in 1983 is barely sufficient for the growing population. Most areas of Chandannath Municipality are relying on the same hydropower plant.

It isn't surprising that the same old plant has failed to provide electricity to numerous households at present. However, change is afoot.

Within no more than three to four days, 11kV electricity line is said to pass through Khalanga illuminating the entire town. Nepal Electricity Authority (NEA) Jumla Distribution Branch is continuously working to set up distribution lines throughout Jumla. On July 11, the authority tested electricity poles and wires extending from Khalanga Bazaar to Nagma, as per Jumla Distribution Chief Gaurav Pandey. “We are looking to flow electricity in the line after completing the test in the coming two to three days,” he added.

Moreover, the team is currently working towards bringing the 33kV electricity line from Dailekh.

In the meantime, NEA has issued a formal warning advising locals to steer clear of electric poles and wires during the testing period.

NADA Demands To Allow Import Of All Vehicles And Concessional Loans By NEW SPOTLIGHT ONLINE 1 day, 3 hours ago

MCC-Nepal Issued An Tender For The Construction Of a Transmission Line By Agencies 5 days, 3 hours ago