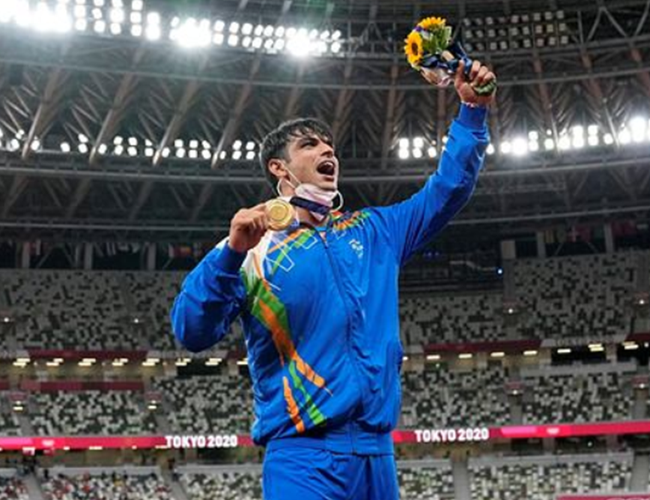 Neeraj Chopra win a gold medal, flinging the javelin a staggering 87.58m to top the charts in Tokyo, With this gold, India win seven medal in total with 2 silver and 4 bronze.

The gold, a historic first for the country in track and field, the second for an individual ever and the first since Abhinav Bindra’s in 2008, would also ensure India’s richest-ever tally (seven).

The Olympic medal is expected to see an army of young boys with dreams reaching out for the javelin. The Asian and Commonwealth golds in 2018, was a turning point in Neeraj’s life in terms of fame and recognition.

However, no country has dominated the Olympics quite like the United States. Although China secured the largest gold medal with 38 Golds, 31 silver and 18 bronze with 87 medals. the United States lead the game securing 108 medals with 36 gold, 39 silver and 33 Bronze.

India won 1 gold, 2 silver and4 bronze with total five medal. The Summer Games in particular are where the U.S. has found success. Team USA has 1,022 gold medals in the history of the Summer Games and 2,523 total medals.

The Indian women had already created history and surpassed all expectations by entering the semifinals of the Games for the first time.

It was not meant to be for them and ended in tears but the Indian women’s hockey team should be proud of what they achieved at the Tokyo Olympics, despite losing 3-4 in a pulsating bronze-medal playoff against Great Britain on Friday.

Great Britain were the gold medallists from Rio 2016, where the Indians finished 12th among as many teams. That Sjoerd Marijne’s charges fought on level terms with such fancied opponents for most part of the match tells one everything about the strides this squad of players has made in the last few years.

CAN Lifts Suspension Of Leg-spinner Lamichhane By NEW SPOTLIGHT ONLINE 2 days, 22 hours ago