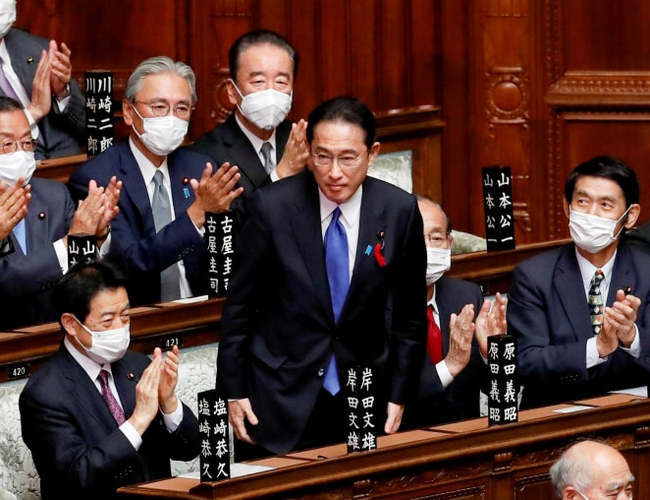 Japan's new leader Kishida Fumio is vowing to do all he can to fight the coronavirus and get the country's economy back in shape.

Kishida Fumio has been elected prime minister by the country's Diet and has formed his Cabinet.

More than half of its members will serve in a ministerial role for the first time.

Kishida held the foreign minister post for more consecutive years than anyone in post-war history.

He took the helm of the main ruling Liberal Democratic Party last week after Suga Yoshihide opted not to seek a second term as leader.

Two members of Suga's Cabinet will continue their same duties as Foreign Minister and Defense Minister.

Kishida has created a new post... the minister in charge of economic security.

In his first news conference as prime minister, Kishida said his priority is to take anti-coronavirus measures.

Kishida said, "We will thoroughly analyze the measures taken so far and examine what has become a bottleneck in dealing with the crisis. Based on the results, we will drastically strengthen crisis response measures such as those to curb people's movements in time of emergency and to secure hospital beds. We will also strengthen the government's ability to function as a control tower for crisis management."

Kishida says he will create a new form of capitalism to achieve a virtuous cycle of growth and distribution. He says his economic policies will ensure a more equitable distribution of wealth.

He says the long-standing issue with North Korea is his top foreign relations priority.

Kishida said, "The abduction issue is the most important issue. I will make all-out efforts to realize the return of all abductees as soon as possible. I am prepared to face North Korean leader Kim Jong Un without any conditions."

One of the new prime minister's first orders of business will be a Lower House election which he plans to call for October 31st.

Japan's Prime Minister Kishida Fumio is launching his Cabinet after being chosen to lead the country by the Diet. The leader is promising an era of Japanese politics focused on working together to take on national and global challenges.

Kishida is a third-generation lawmaker with diplomatic experience. The 64-year-old held the foreign minister post for more consecutive years than anyone in post-war history.

He took the helm of the LDP last week after Suga Yoshihide opted not to seek a second term as leader.

Kishida says he'll help heal a medical system and economy hurt by the pandemic. He also vows to protect Japan's interests while raising its global profile.

Helping him on this path will be his Cabinet. And new Chief Cabinet Secretary Matsuno Hirokazu has announced who made the cut.

While, another former member of the Suga Cabinet, Hagiuda Koichi, will move to economy, trade and industry.

Kishida has created a new post. Kobayashi Takayuki is the minister in charge of economic security.

Later in the day, Kishida will hold a news conference to lay out his priorities and convene his first Cabinet meeting.

One of his first orders of business is a Lower House election which he plans to call for October 31st.

Ukraine welcomes US Offer Of Long-Range Rockets By Agencies 22 hours, 1 minute ago

US Shoots Down China's Balloon, Says Defense Department By Agencies 22 hours, 16 minutes ago