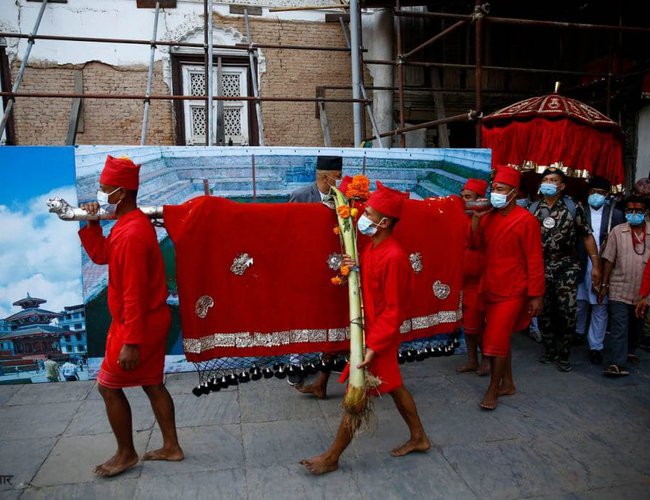 Hindus across Nepal are observing Fulpati, the seventh day of the Dashain festival, on Friday. On the occasion, Fulpati is received into houses as per the age-old tradition.
Fulpati, an assortment of flowers, banana leaves, ginger plant, sugarcane plant and fruits considered auspicious, is anointed at Dashainghar of the Hanumandhoka Palace in Basantapur.
It is brought to Kathmandu from Gorkha following the Vedic rituals to be anointed at Dashainghar.
A team of Gurujyuko Platoon, Nepali Army, Nepal Police and other high-ranking officials, the Asha Gurja team, band music, panchebaja bands and decorated Kalsyoulis and a procession along with cultural pageantry leave Hanumandhoka for Jamal with the Fulpati.
However, due to the fear of COVID-19, there might not be a crowd of people to watch the Fulpati programme this year.

Traditionally, on this day, banana stalks, jamara, belpatra (leaves of wood apple) and sugarcane sticks tied with red cloth along with Kalash filled with holy water are brought to Hanumandhoka from Gorkha on a decorated palanquin.

On this occasion, Nepali Army holds a parade at Tundikhel that includes gun firing, which is observed by the president and government officials every year.

All government offices will remain closed for five days from Phulpati to Dwadashi.

Mahaashtami and Mahanawami will be observed tomorrow and the day after respectively. Likewise, Vijaya Dashami, the main day of Dashain will be celebrated on October 15.

Though tika can be received and offered from the day of Vijaya Dashami to Kojagrat Purnima, Nepal Panchanga Nirnayak Samiti (government body authorised to decide dates and times for Hindu festivals) has said that 10:02 am is the most auspicious time to receive Tika this year.​​​​​

Two Shilas Left For Ayodhya From Janakpurdham By Agencies 6 days, 22 hours ago