Climate change is causing the highest glacier on Mount Everest to melt at a rapid pace, a new study has found. 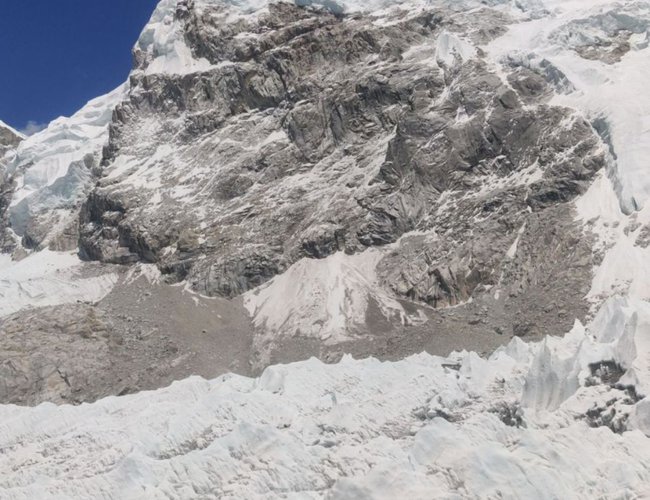 Researchers led by the University of Maine found that the South Col Glacier has lost more than 180ft (54m) of thickness in the last 25 years.

The rate of decline has been blamed on warming temperatures and strong winds.

Scientists leading the study found that since the 1990s, ice that took around 2,000 years to form has melted away.

They also noted that the glacier's thick snowpack has been eroded, exposing the underlying black ice to the sun and accelerating the melting process.

Dr Mariusz Potocki, one of the study's lead researchers, said that the findings suggested "that the South Col Glacier may be on the way out - it may already be a 'relic' from an older, colder, time".

Another author of the report, Dr Tom Matthews, a climate scientist from Kings College London, observed to the BBC that there had been no single change in the region's climate to cause the surge in melting.

"Instead, the steady uptick in temperatures eventually pushes the glacier across a threshold, and suddenly everything changes," he said.

While glacier melt has been widely studied, the impact of climate change on glaciers at this height has not previously been studied.

A team of 10 scientists visited the glacier, where they installed the world's two highest weather monitoring stations and extracted samples from a 10-meter-long (around 32 feet) ice core.

Expedition leader Dr Paul Mayewski told the BBC that the study "adds a high elevation understanding that has not previously been available and that drives home the remarkable sensitivity Earth systems have to even relatively small change".

Dr Mayewski also observed that the rapid melting could have a wide variety of "significant regional to global scale implications".

Around one billion people depend on the Himalayan mountain range for drinking water, and if other glaciers in the region - and worldwide - follow Everest's example, their capacity to provide water for drinking and irrigation could fall significantly.

The decline could also provide a challenge for climbers, as future expeditions to the mountain could face more exposed bedrock and ice cover, making it more difficult to climb.

Dr Matthews noted that the South Col Glacier "is very small in the grand scheme of things".

He told the BBC that researchers must now examine "to what extent the sensitivity we've discovered here applies more widely to ice stores on the roof of the world".

Last year, a team of French researchers concluded that the world's glaciers are melting at an accelerating rate.

Nepal To Fine Up-to US$ 800 To Vehicle Failing To Pass Emission Test From December 16 By NEW SPOTLIGHT ONLINE 1 month, 2 weeks ago