In more than seven months, the renovations of temporary diversion embankment of the Melamchi Drinking Water Project has begun with a target to bring water to Kathmandu by April 14 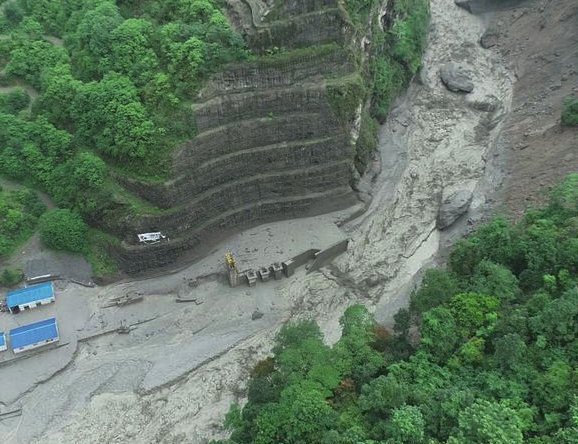 Following the mobilization of equipment by Chinese contractor Syno Hydro at the head work site of Melamchi River, the reconstruction work of temporary diversion has begun, giving rays of hope to water thirsty people of Kathmandu to get water by April 14.

With the system buried by the devastating flood debris of June 2021, the Melamchi Drinking Water Board had to stop the distribution of water supply. Roads, bridges and other temporary infrastructure, including the head work and diversion structures, were damaged by the floods, leaving the project with many uncertainties.

However, early completion of the damaged roads and bridges and mobilization of contractors to renovate the damaged project by Ministry of Water Supply and Sanitation has given new hopes.

Although the credit also goes to other secretaries of Ministry of Water Supply and Sanitation and project heads of Melamchi Drinking Water Board, the experience and dedication of Secretary Madhav Belbase worked in the completion of the project after decades of delays. Backed by then Prime Minister K.P. Sharma Oli and minister of Drinking Water Mani Thapa, secretary Belbase, who is now the member of Public Service Commission had quietly made every decision to give life to the virtually dead project.

Executing all the major decisions Executive Director Tiresh Prasad Khatri also played a crucial role to bring the project right back in track following the pull out of Italian contractor Cooperativa Muratori Cementisti (CMC) di Ravenna due to dispute with then secretary and Minister Bina Magar, daughter-in-law of Prachanda.

Italian officials named two senior Nepali bureaucrats—Gajendra Kumar Thakur, a former secretary at the Water Supply Ministry, and Surya Raj Kadel, executive director of the Melamchi Water Supply Development Board—as the officials who demanded a cut in the amount approved by the Dispute Adjudication Board.

“Thakur and Kadel told the CMC manager for the Melamchi project that they wanted a discount of Rs 62 million on the payment and a cut of 3 percent on the remaining Rs 300 million,” said the CMC official in an interview over the phone from Ravenna, Italy (The Kathmandu Post). Both Thakur and Kadel denied the allegations in an interview with the Post.

After the pull out of Italian Company, the government issued the contract to Syno Hydro to complete the remaining work. However, in the middle of the testing of tunnel in 2019 June, a gate collapsed and two persons were killed on the spot. The project faced another major setback, getting delayed by another seven months.

Working quietly in a hostile situation, secretary Belbase finally revived the project dropping the water from Melamchi to Kathmandu in March 2020. 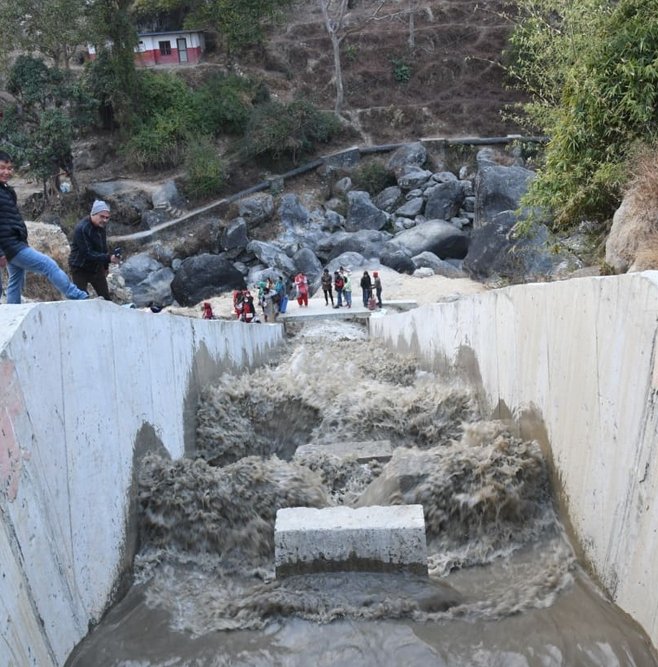 Passing a series of hurdles and obstructions due to mishandling and mismanagement, the longest mega project faced blows from nature as well.

As the fragile situation is still prevailing over the sources of Melamchi with further possibility of big landslide in monsoon, the project will supply the water till June or onset of monsoon.

Expert panel in their study has recommended shutting down the tunnel from June to September to prevent the damage in the tunnel in cases of another devastating floods.

Although the report prepared by an expert committee is yet to be published, it is reported that the expert warned the possibility of another major landslide due to unstable debris above the headwork site.

Minister Umakant Chaudhary said that the water will be diverted to the tunnel as per the recommendations of experts. The Minister said that the process of stabilization of mountain above the headwork will take time and board will take the decision regarding water supply.

“The Asian Development Bank is conducting a study on the details of the reasons behind the floods and landslides, damage caused by them and permanent alternatives to conserve the watershed region,” said Minister Chaudhary. 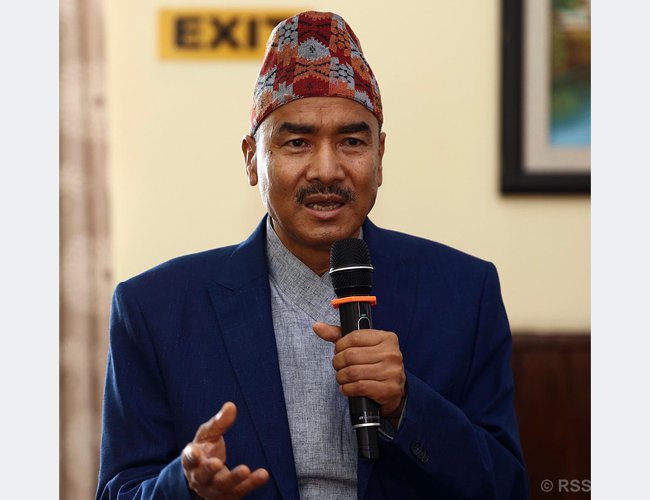 “As the work for the reconstruction of the Melamchi Water Supply Project (MWSP) has begun to bring the water from the Melamchi River temporarily to the Kathmandu Valley, I am confident that people will receive the water from Nepalese New year,” said Umakant Chaudhary, minister of Water Supply and Sanitation. The national pride project’s head works and a part of tunnel were damaged by the floods caused by torrential rains on 15 June 2021.

Contractor Sino Hydro has reached the site and started work to clear the debris deposited by the floods and landslide upstream of the river.

“Currently, work has begun to bring the water to the capital valley by creating a diversion besides the head works,” said Minister Chaudhary at a press conference organized at the Ministry in Singha Durbar.

According to him, since Sindhupalchowk was announced as a crisis-hit area until October 2021, no work on the project could be conducted before the festive season.

The project has said that water would be brought to the valley by 14 April 2022, the first day of Nepali Year 2079. Minister for Water Supply Chaudhary has directed the construction company and employees of the Melamchi drinking water project to restore and complete the flood-damaged project within mid-April.

The Minister gave such a direction during a field inspection of the national pride project on January 28. The government has reached an agreement with the Chinese Sino Hydro to reconstruct the project damaged by flooding in June 2021.

The Minister said that he would visit and take stock of work progress of the damaged project once a week.

During the visit the Minister was accompanied to the project site by a team of technicians and the Ministry Secretary Pramila Devi Shakya Brajacharya, Director General of the Department of Water Supply and Sewerage Management, Tiresh Prasad Khatri, Executive Director of the Melamchi Water Supply Development Board, Basu Dev Paudyal and Chairperson of Helambu Rural Municipality Nima Gyaljen Sherpa.

More than seven months after the intake of the Melamchi Water Supply Project (MWSP) was buried by debris brought by massive floods in the Melamchi River in Sindhupalchowk on 15 June 2021, works have begun to clear them.

According to him, the work will be executed in a way so that the water from the Melamchi River can be brought to the Kathmandu Valley by the Nepali New Year 2079, on 14 April 2022.

“In the first phase, the debris obstructing the water from channelizing into the tunnel connecting the river and reservoir in Sundarijal of Kathmandu will be removed so that the water could be brought to the valley temporarily,” said Paudyal, who returned from the site after making an observation of the preparation made by the contractor.

A temporary access road to the MWSP’s head works was recently opened. The road was severely damaged by the torrential rains and subsequent landslides in monsoon last year. As the landslides jeopardized the human settlement above the road, the infrastructure could not be repaired or developed until the monsoon ceased.

The board has extended the deadline to complete the construction of the head works by mid-July this year as per the decision of a Cabinet meeting a couple of weeks ago, and directed the Sino Hydro to reach the site. The cost of the contract has also gone up by Rs. 320 million with the time overrun.

The cost variation is made for the contractor to clear the debris deposited at the head works. Earlier in October 2019, the board had signed a contract with Sino Hydro with a mandate to complete the construction of head works in 15 months.

Paudyal said that the actual cost of the project could be calculated after clearing the debris as it is not known whether the head works constructed before the floods is intact.

According to the primary estimates made in August last year, the floods caused damages of about Rs. 2 billion to the project and the head works was buried about 15-20 meters down the debris.

The contractor had completed the construction of civil works of the head works, leaving only a small amount of hydro-mechanical and electrical works to complete.

The project had started distributing the water from the Melamchi River by the end of March 2021 while President Bidya Devi Bhandari had inaugurated the water distribution on April 2 last year.

The Rs. 36 billion project was conceptualized about five decades ago was completed about two decades after its commencement with multiple deadline extensions and cost overrun. 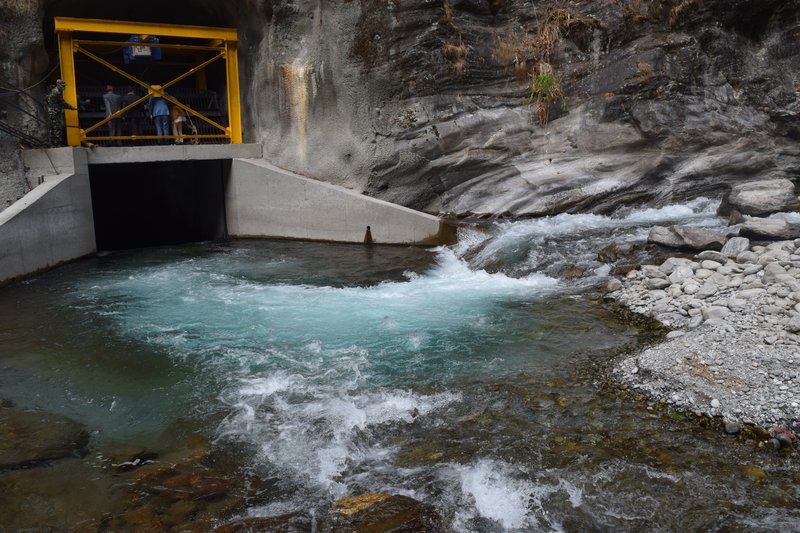 In the first phase, the national pride project will distribute 170 million liters of water a day – half of the total water that is being brought to the Kathmandu Valley from the Melamchi River in Sindhupalchok district via a 26.5 kilometer tunnel. Another 340 million liters water would be brought to the valley from the Yangri and Larke rivers in Sindhupalchok through the same tunnel.

As the government has already spent huge resources focusing on Melamchi, there is no immediate alternative before the government other than to make Melamchi a viable project bringing water to Kathmandu. The project had started during the tenure of Nepali Congress leader Krishna Prasad Bhattarai and was completed during the tenure of CPN-UML leader K. P. Oli as prime minister. Now NC leader Sher Bahadur Deuba, who is one of the trusted party colleagues of late Bhattarai, is the prime minister and his job is to make the project technically sustainable and viable for the water supply to Kathmandu.

Supporting Nepal Is A Priority For The US: USAID Administrator Samantha Power By Agencies 52 minutes ago