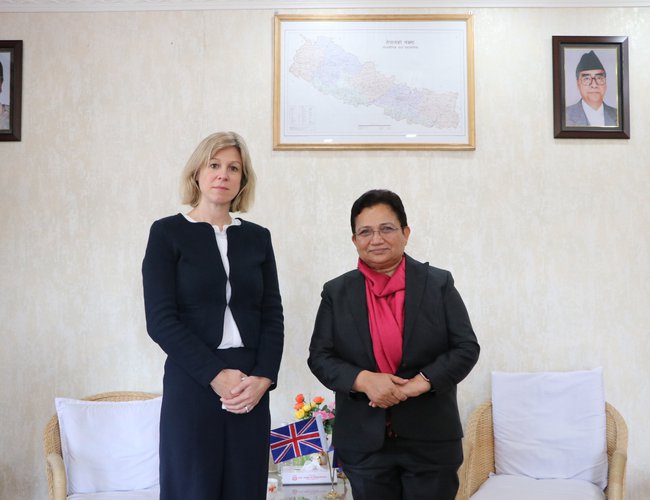 During the meeting held at latter’s office in Singh Durbar, the two discussed about the issues of mutual interest and common concerns.

On the occasion, Minister Bhusal pledged that Nepal would work closely in all areas of mutual interests.

Stating that production and promotion of clean and renewable energy, e-mobility, low-carbon infrastructure and eco-tourism were the priorities of Nepal, the Minister thanked the UK Government for its support to Nepal in renewable energy and in the environment management endeavors.

Reminding the role and contribution of Himalayas in balancing marine ecosystems and minimizing the global temperature rise, the Minister said, “We expect international support and cooperation in our efforts to protect the mountain range.”

As the Minister apprised the UK representative, her Office had prioritised the promotion of reservoir-based projects to maintain a balance in energy sector.

“Hydropower, one of the types of clean and renewable energy, is the priority of the Nepal Government and its focus is on the production of mixed energy”, she mentioned.

Terming the UK as the most trusted development partner of Nepal, the Minister recalled its support to Nepal during crisis and disasters.

According to national news agency, the ambassador briefed the Minister that the UK Government was ready to facilitate Nepal in renewable energy production and power trade. “It is supporting the institutional strengthening of bodies working in the energy sector here", added the UK Ambassador.