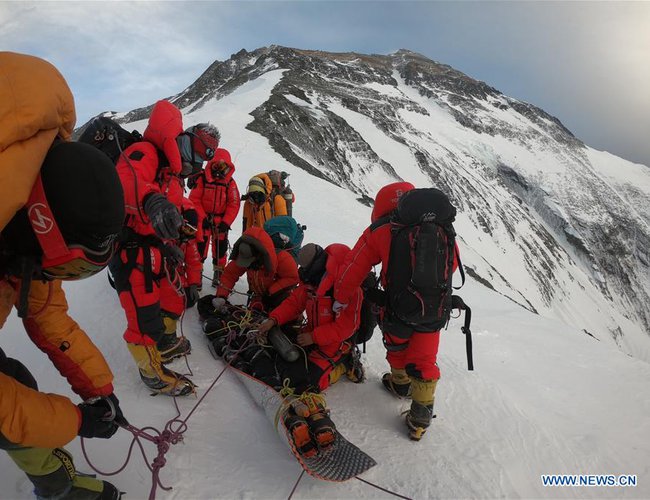 A team of icefall doctors has left the base camp to pave the way for the 'spring' season of climbing the world's highest peak, Mount Everest. A team of nine youths from Namche has left for Mt. Everest reports The Rising Nepal

An experienced and skilled person who makes a path in the snow is called an icefall doctor. This year, the road is being paved under the leadership of Aangsarki Sherpa. For years, the government has been delegating the task of building the path to Everest to the EPCC.

Khumbu has been deserted for quite some time after the COVID-19 pandemic started. Every year, a new path is built by replacing the old one damaged by snow. Icefall doctors will build a path to the summit of Mt. Everest by connecting aluminum fences.

According to the Daily, Climbers can reach Mt. Everest only after clearing the snow-covered path from Icefall to Camp-2, hanging their cable and keeping the stairways.

As the construction of footpaths is very risky, there is a tradition in the base camp to start the work by reciting prayers from the Lama as per the Buddhist tradition.

Every year in the 'October' and 'Spring' seasons work is started according to this tradition. The construction of the path has started to prevent any calamity during the construction, to return safely, to be protected by God and to make the journey successful without any accident among the climbers.

It is said that the road construction work in the area will be done only by trained icefall doctors and other workers will not have much work to do.

Sherpas, who have been working as icefall doctors for years, risk their lives while paving the way. They said that the path to climb the mountain has to be built with the help of ropes by digging snow and ice. As the path gets damaged in case of avalanche, the road has to be built in the same place many times reports The Rising Nepal.

More Than 55,000 Foreign Tourists Enter Nepal Via Plane In January By Agencies 2 days, 20 hours ago

POKHARA INTERNATIONAL AIRPORT Inaugurated With Fanfare By A Correspondent 2 weeks, 4 days ago

OPENING CHINA Concern for Nepal By A Correspondent 2 weeks, 4 days ago

CAAN Has Taken Technical Tests On All ATR Aircraft By Agencies 2 weeks, 4 days ago