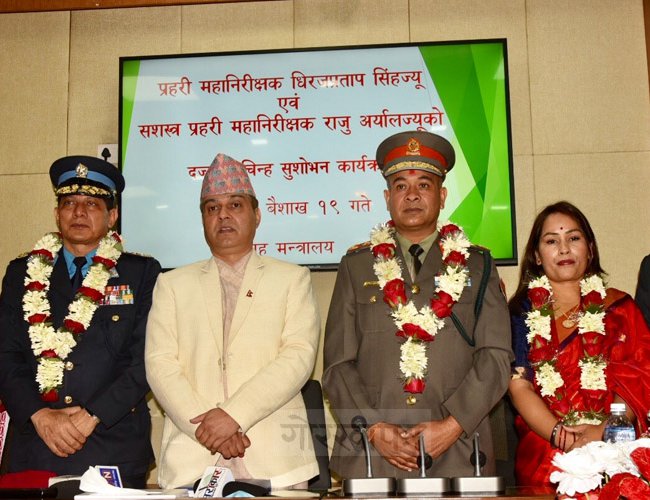 Home Secretary Tek Narayan Pandey decorated them with the insignia at an investiture ceremony organized at the Ministry of Home Affairs.

Singh and Aryal were promoted to the post of Inspector General by a decision of the Council of Ministers on May 1 with the compulsory retirement from service of IGP Shailesh Thapa Chhetri and APF Inspector General Pushpa Ram KC on completion of 30 years of service.

On the occasion, the Secretary Pandey expressed the confidence that the Inspector General duo Singh and Aryal of both the security bodies will fulfill their key role in maintaining the law and order and good governance in the country and in the conduction of the election in a peaceful and fear-free environment. He also expressed that the new IGP duo would play important role in the organisational strengthening.

The Home Secretary also wished both the new IGPs a successful term in office in connection with taking ahead both the police organizations in building a just and peaceful society which is the aspiration of the state.

He said the IGs of both organisations will steer their respective organisations for building just and crime-free society during their term.

Stating that the current human resources of 79 thousand in Nepal Police and of around 37 thousand in APF was not enough to cope with the need and demand of the present changing society, Home Secretary Pandey said, "Considering the demand for the upgrading of the police stations and the Area Police Offices, the human resources in Nepal Police has to be increased to at least 100 thousand and that of APF to around 50 thousand."

He pointed out the need of restructuring and capacity development of the human resources in both the security agencies as well as in doing away with the intra-organisational anomalies and aberrations.

Noting that development and security were closely interrelated, the Home Secretary stressed on moving ahead both these together in an integrated way. He said the government has selected the police officers who are capable of providing effective leadership to their respective organisation to the post of IG.

Newly-appointed IGP Singh committed to carry out work remaining within the parameters of professional integrity.

He said the responsibilities entrusted on IGP by the state would be fulfilled with high professionalism by emphasizing on the career development of the police employees, organisational strengthening.

IGP Singh added that the upcoming strategy would be focused towards enhancement of public faith towards Nepal Police by facing up the additional security challenges and in crime control with more seriousness and determination.

He also emphasized on making the organisational activities transparent, on adopting zero tolerance on corruption control and on rooting out criminal activities. He vowed to work for reforming the police organisation by taking his fellow police officers on board. IGP Singh said Nepal Police will pay its full attention to making the upcoming local election free, fair and fear-free.

Newly-appointed APF Inspector General Aryal said that he would give special priority to human resources development for further upgrading the performance indicators and standards, use of modern technology and development of result-oriented new working style.

He also expressed his commitment to moving ahead as per the home administration reform plan launched by the Ministry of Home Affairs with the main objective of fulfilling the public aspiration for peace, good governance, development and prosperity. He gave assurances of carrying out works by keeping the local election on the top of his priorities for the present. (RSS)