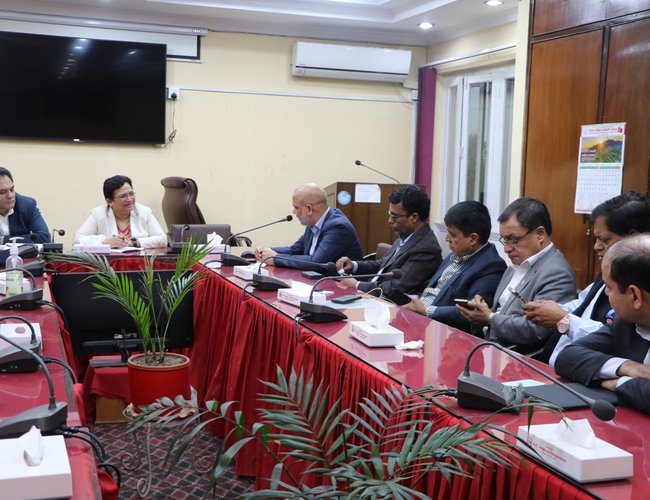 Minister for Energy, Water Resources and Irrigation Pampha Bhusal Monday held a discussion with the industrialists about the power supply problem in some big industries.

During the meeting at the Ministry, she sought reasons for power outage problem in industrial areas with the officials of Nepal Electricity Authority and Federation of Nepalese Chambers of Commerce and Industry (FNCCI).

Minister Bhusal said that the problem in power supply was temporary and it would be solved by Tuesday.

She said, “The problem in power supply is not due to us, it is a global problem. In the case of Nepal, the government is committed to resolving it, and a solution to it will be sought soon.”

Explaining that the problem is seen in the dry season as large reservoir projects were not constructed for energy security in the past, Minister Bhusal urged all and one not to politicise the problem.

“We don’t have to worry about energy. Negligence to energy security in the past has culminated in this temporary problem, and this will be solved in the coming days,” she said.

Similarly, Secretary at the Ministry Devendra Karki said that the temporary problem in energy system would be solved immediately.

“This problem is temporary, the state will address it,” he said.

Similarly, Managing Director of Nepal Electricity Authority Kul Man Ghising urged the industrialists not to panic, and said, “The current problem is only for two or four days. Don’t panic, it will be resolved.”

During the discussion, President of the FNCCI Shekhar Golchha informed about the problems of power supply.

He said, “There is a problem in power supply, the government has to solve it.”

MCC-Nepal Issued An Tender For The Construction Of a Transmission Line By Agencies 8 hours, 28 minutes ago

Make In Nepal Products Will Be Promoted: Secretary Gyawali By Agencies 4 days, 8 hours ago