Nepal Has Not Witnessed The Situation Of Economic Crisis As Sri Lanka: Swarnim Wagle

Nepal Has Not Witnessed The Situation Of Economic Crisis As Sri Lanka: Swarnim Wagle 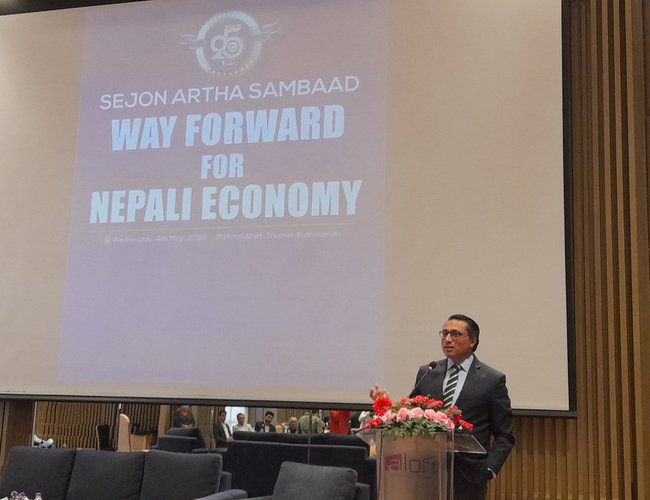 Former Vice-Chairperson of National Planning Commission (NPC) Dr Swarnim Wagle has asserted that Nepal’s economy cannot be compared with the Sri Lankan one.

At an interaction organized by the Society of Economic Journalists-Nepal (SEJON) on ‘Future Direction of Nepali Economy’ here on Wednesday, he claimed that Nepal has not witnessed the situation of economic crisis as Sri Lanka was facing. He however stressed the need to maintain fiscal discipline so as to mobilize all indicators of the economy in the right manner.

“Economic crisis has not occurred in Nepal now. There is no point to compare Nepal’s economy to that of Sri Lanka. But, the danger of economic crisis is looming large which are flatly due to policy and economic shortcomings. In order to maintain fiscal discipline, administrative and policy reforms are required”, he highlighted.

Economist Dr. Wagle went on to say that bad governance propping up in the country coupled with whimsical decision-making trends can push the country to a crisis. Nepal’s status of public borrowing and balance of payment is not identical to that of Sri Lanka but the governance character is, he said, adding the economic tendencies are different.

Inability to repay the loan and level up the loss are the main reasons behind the economic crisis of Sri Lanka, Dr Wagle said, underscoring the need for Nepal to take timely precautionary measures.

Citing the reference that Sri Lanka rampantly received loans for infrastructure after the end of the armed struggle, he said the South Asian country had to grapple with an economic crisis as it had received foreign loans for investment without proper study.

On the occasion, Chairperson of the Federation of Nepalese Chambers of Commerce and Industry (FNCCI) Shekhar Golchha highlighted the need for collaborative efforts of the government and private sector for enabling the country’s economy. He also echoed the need of initiating policy reforms from the government side to advance the economy to the right track.

Senior economic advisor at the Ministry of Finance Surendra Uprety said the country’s economic situation was not in a worrying state. He further noted that there are several bases for the country to gain 5.8 percent economic growth as almost all sectors of the national economy are already in flux.

He laid emphasis on agriculture and employment for production-based economic development so as to prepare a base for sustainable development.

Vice-Chair of Bankers’ Association Sunil KC said the liquidity crunch would be prevailing in the country throughout the current fiscal year.

World Bank’s senior economist Alice Joan Brooks said price inflation would not move up to a higher level with the increasing production of hydropower and the use of biogas.

As Nepal’s public debt portfolio against Gross Domestic Production is satisfactory, he said there is no situation to get worried about the country’s economic situation.

SEJON Chair Janardan Baral said the economic dialogue between different stakeholders and economic experts was organized to rightly inform the general public about the current status of the country's economy.

MD GHISING Leakage To Single Digit By A Correspondent 22 hours, 11 minutes ago

NRB'S DECISION Surrounding Controversy By A Correspondent 1 day, 1 hour ago

NEPALESE ECONOMY Growth 5 Percent By A Correspondent 1 day, 22 hours ago