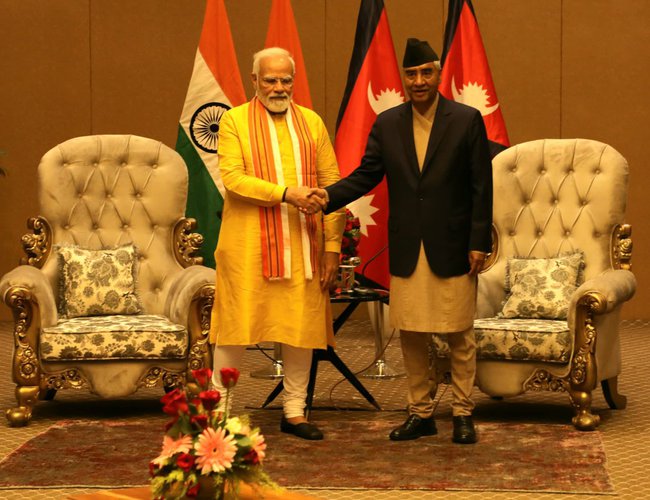 At the invitation of Prime Minister Sher Bahadur Deuba, Narendra Modi, Prime Minister of India, paid an official visit to Lumbini, Nepal on the auspicious occasion of Buddha Jayanti on 16 May 2022.

Also present to welcome the Prime Minister of India were Federal Ministers, Chief Minister of the Lumbini Province, Ambassador of Nepal to India and other senior officials of the Government of Nepal.

The Prime Minister of India was accompanied by a high-level delegation consisting of National Security Advisor, Foreign Secretary and other senior officials of the Government of India.

The Prime Minister of Nepal thanked the Prime Minister of India for the Government of India’s assistance in fighting the COVID-19 pandemic. He also expressed gratitude for India’s support in the post-earthquake reconstruction, including the heritage sites.

The two sides discussed promoting cooperation in connectivity; early supply of fertilizers; expeditious conclusion of the revised Transit Treaty, its Protocols and Memorandum; review of the treaty of trade; additional air entry routes; hydropower generation; culture and tourism including Buddhist circuit and Ramayana circuit; education and academic collaboration; increasing the threshold of carrying Indian currency by individuals; and cooperation at regional and multilateral forums in matters of mutual interest.

In the context of official inauguration and commencement of commercial operation of the Gautam Buddha International Airport, Prime Minister Deuba highlighted that the airport will further facilitate connectivity, cultural linkages, and people-to-people movements and promote cultural tourism. He also requested the additional air entry routes from Mahendranagar, Nepalgunj and Janakpur.

Prime Minister Deuba requested for seamless power trade on a long-term basis under mutually beneficial terms. The two sides expressed satisfaction that Arun III project is progressing well and welcomed the signing and exchange of MoU between Nepal Electricity Authority and SJVN Ltd. India for the development of Arun-IV hydropower project.

The two sides also agreed in principle to establish the sister city relations between Lumbini and Kushinagar. The necessary process will be taken in due course through appropriate local authorities.

Earlier this morning, the Prime Ministers of Nepal and India visited the sacred Mayadevi Temple and worshipped at the Birthplace of the Lord Gautam Buddha. The two Prime Ministers laid the foundation stone for the construction of the India International Center for Buddhist Culture and Heritage at the Lumbini Monastic Zone.

The Prime Minister of India together with the Prime Minister of Nepal attended the special ceremony organized by the Lumbini Development Trust in Lumbini International Buddhist Meditation Center and Assembly Hall in the afternoon. In their address, the two Prime Ministers highlighted the importance of Buddha’s teachings of peace, harmony, and mutual respect.

Prime Minister Deuba highlighted the eternal, archeological and historical value of Lumbini a sacred land and the fountain of Buddhism, world peace and harmony and said that the divine footprints of Lord Buddha continue to inspire our pursuit of peace and sustainable development. The text of the remarks by Prime Minister Deuba and its unofficial translation is attached.

The two Prime Ministers also witnessed the exchange of the following Memoranda of Understanding related to cooperation and collaboration in academic field and power sector:

The Prime Minister of India returned in the afternoon upon successfully completing the visit to Lumbini on the pious day of Buddha Purnima. Prime Minister Modi was seen off by Prime Minister Deuba, Madam Arzu Rana Deuba, ministers and senior officials of the Government of Nepal.

The official visit of Prime Minister Modi to Lumbini, Nepal has contributed in deepening the socio-cultural bonds and cooperation between Nepal and India.