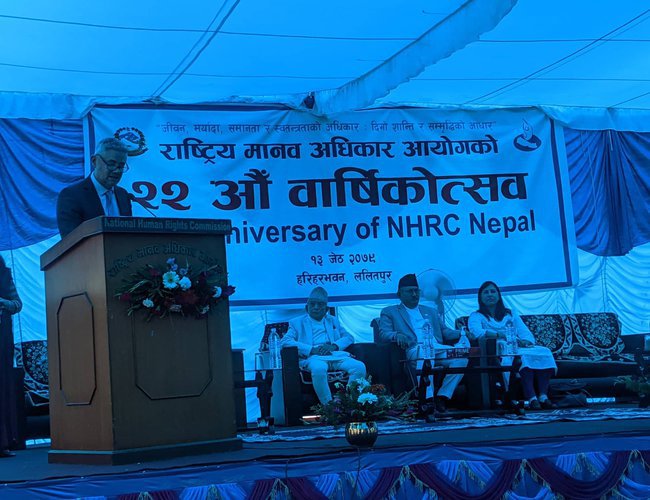 Right activists are demanding more stern actions against those individuals involved in heinous crime of human rights violations and are complaining that the government does not implement the NHRC’s recommendations.

In his address to the 22nd anniversary of the NHRC, the Home Minister shared that a task force had been already formed to proceed towards that end.

He pledged to keep the NHRC's independence and sovereignty intact.

He went on to say that the bill to amend the NHRC act had been presented to the House with priority and the presence of NHRC would be further effective once the document got endorsed. The bill is centered on enhancing the freedom and sovereignty of the NHRC, according to him.

As he said, the government is committed to ensuring accessibility of survivors of war-time incidents to justice and it will be carried out through a transitional justice mechanism soon. “Government security bodies and law-implementing bodies are committed to protecting and respecting the people’s civic and political rights,” he said, claiming that there was a fall in incidences of human rights violation.

“The government adopts a policy of ending impunity and a zero-tolerance against the violation of human rights,” he said, adding that he pledged to build a human rights-friendly atmosphere to promote the economic, social and cultural rights of the people.

According to the Home Minister, coordination and cooperation among the three-tier government are going on for implementing the fifth human rights national work plan.

“The government is serious towards the implementation of international and regional commitments to addressing issues of migrant workers subjugated to torture, abuse and labor exploitation by strengthening the capacity of diplomatic missions abroad in cooperation with the international organizations and the NRNA,” he said.

The Home Minister went on to say that a security mechanism had been further strengthened to deal with the cases of violence against women such as rape, domestic violence and acid attack efficiently and ensure justice to survivors. “I want to share here that the government is doing homework to formulate required laws to prevent such incidences.”

The government bodies are working actively and with much concern to protect women and girls from being subjugated to violence and criminal offences, according to the Minister.

As he said, the government expects support and cooperation from civil society, social entities, political parties and human rights defenders to build a society free from a crime. He vowed to pay special heed to accelerate the rebuilding of the NHRC building damaged by the 2015 earthquake.

Also speaking on the occasion, NHRC chair Top Bahadur Magar expressed his concern over what he said was lack of full implementation of its recommendations.

“The NHRC is in regular discussions with bodies concerned including the government to ensure the full executions of its recommendations. We hope for justice to survivors.”

He took time to insist on an equal role of a three-tier government for the protection and promotion of human rights.

He was worried over what he said was lack of priorities for the people’s rights to education, health, housing, food sovereignty and consumers’ rights. “The incidences of women violence, sexual assault, rape and caste-based discriminations have not been minimized. As he said, the NHRC reached all the 77 districts for the monitoring of local level elections in view of human rights reports.

In his opening speech, member of commission Dr. Surya Dhungel said that implementing the recommendations given by commission enhances the image of the government at international and national levels and help to end impunity.