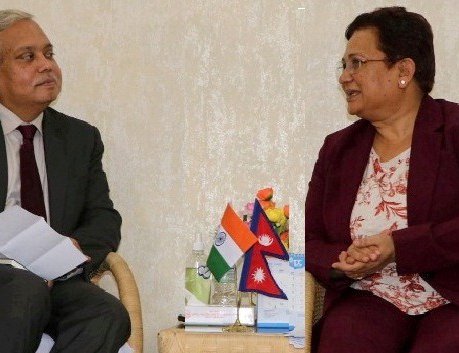 In the meeting that took place at the Ministry in Singha Durbar, they discussed the topics of bilateral relations and cooperation between Nepal and India.

On the occasion, Minister Bhusal said that the Nepal-India ties were moving forward on the basis of friendship, equality, cooperation, and mutual respect. She expressed the confidence that this relationship will become stronger in the days to come.

Stating that important works have been carried out in the energy sector between Nepal and India in recent times, the Energy Minister hoped that this collaboration between the two nations will be further expanded in the days ahead.

"The energy trade taking place between Nepal and India at present is positive. India needs clean energy from Nepal. So, in this context, Nepal is willing to move ahead by signing a long-term electricity trade agreement in the coming days. I have the conviction that important success would be achieved in the power trade sector during your term in office," Minister Bhusal said.

She stressed the need of taking ahead with the Pancheshwor Hydroelectricity Project as well as to actively implement the understanding reached between the two countries regarding the damage caused by a flood.

Ambassador Srivastava on the occasion gave assurances that he would make whatever initiatives he can to further expand the collaboration and partnership between the two countries. Noting that significant achievement has been made in the electricity trade sector in the last year, he said the collaboration of both the governments is worth appreciating in this.

"Power trade is beneficial to both countries. There would be consistent support from our side on this," the Indian Ambassador said, giving assurances of making relentless efforts for electricity production and trade.

Water Resources and Irrigation Secretary Sagar Kumar Rai, Joint Secretary duo Baburam Bhandari and Chiranjivi Chataut, and the representative of the Ministry of Foreign Affairs were present in the meeting. (RSS)