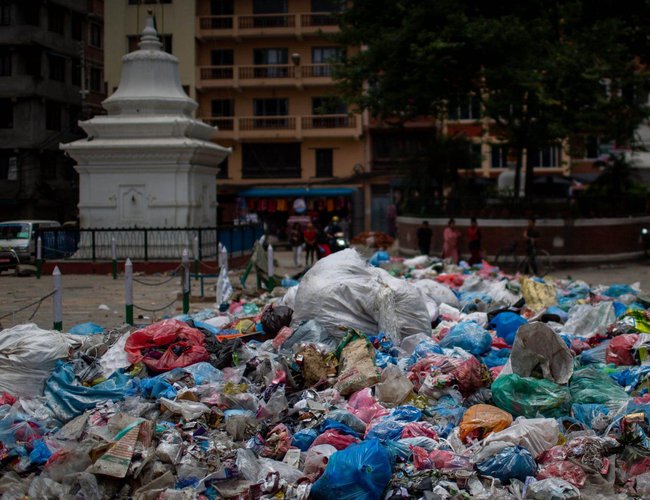 Per capita waste production per day in Nepal is 317 grammes. This is mentioned in a report prepared in 2013 by the Waste Management and Processing Centre with support from Asian Development Bank (ADB). This figure has changed to some degree in recent years. An individual produces half a kilo or 500 grams waste in a day.

The proportion of plastic in this waste is equivalent to 12 per cent.

One thousand one hundred and forty metric tonnes of waste is generated in Kathmandu Valley daily. Managing this waste has always been a headache to the Kathmandu Metropolitan City and the government authorities. Then there is the complaint of KMC's high-handedness by people around the landfill site.

The streets in Kathmandu are littered with waste and are stinking for a lack of proper waste management. On the other hand, millions of rupees are spent just for managing the waste. The waste can easily be turned into a source of making money if the government brings and implements policies for the long-term management of the waste.

Nepal Oil Corporation (NOC), the state-owned petroleum importer and supplier, has said it is short of cash to import fuel. The price of petrol has reached Rs 181 per litre while that of diesel has touched Rs 172 per litre.

According to the NAST senior scientist, 570 metric tonnes of the entire solid waste generated in the Kathmandu Valley can be processed to produce 342 kilolitres or 342 thousand litres of fuel. "It is possible to produce petrol, diesel and kerosene by processing plastic waste.

The environment also becomes clean. The fuel is produced at home and this saves our depleting foreign currency reserves as well," he asserted.

NAST had installed the system to produce fuel from plastic in 2016 itself. Then Chief of NAST, Technology Faculty, Dr Suresh Kumar Dhungel and Chairman of the Eco Party Japan, Chiseko Matsumoto signed a bilateral MoU for producing fuel from plastic.

Although this technology was new to Nepal, it was in practice in the developed countries of the world. Works have been carried out at NAST regarding producing fuel using technology and equipment provided by Eco Party Japan.

About a litre of crude fuel was produced from one kilogramme of plastic through this technology initially installed at NAST. Currently, NAST has a machine that can process 10 kilograms of plastic.

As shared by Dr Dhakal, if the government invested in producing fuel from plastic waste, the country's foreign currency reserve can be saved.

"We are poor despite having the means and resources and gradually becoming dependent on imports. Fuel can be produced from the plastic waste that is thrown in the streams or that is burnt," Dr Dhakal insisted and urged the government to work in this option without any delay.

Around one litre of raw fuel was produced from one kilo of plastic using the technology during a trial run in 2016. Dhakal said that they are very happy to bring the technology producing fuel from plastic into the country.

The NAST has set a target to bring the large capacity technology producing fuel from plastic into the country within one month.

Chief Dhungel said, “All required process has been forwarded. We will install the technology within a month.” Normally, 700 millilitres of petrol is produced from one kg of plastic.

Stating that a lab would be set up at NAST premises within the next 45 days, Dhakal said that South Africa, America, Canada and other countries produced fuel from plastic waste in a commercial scale.

The impact of the conflict between Russia and Ukraine has been felt in Nepal also at present. Fuel import is also one of the main reasons for the depletion of the foreign currency reserve. As per the statistics shared by NOC, fuel worth more than Rs 250 billion has been imported in the 11 months of the current fiscal year alone.

The graph of inflation is climbing up in the country with the rising fuel prices in the international market. An increase in the price of fuel has a snowball effect in every sector of the economy. The chances of inflation reaching a double-digit figure have increased although the government has said it will limit inflation to around seven per cent.

As he said the quality and quantity of the plastic determine the volume of fuel that can be produced from it.

Dr Dhakal said that this technology has been successfully used by developed countries such as Japan, America, Canada etc. He believed that the private sector can also invest in this technology if the government supported it.

ADB has already said it is interested in investing in the technology. Dr Dhakal suggests that the government should start a model project on this.

"Daily more than 300 thousand litres of fuel can be produced in the country by processing the plastic waste generated in Kathmandu Valley and other big cities like Biratnagar, Birgunj, Narayangadh, Pokhara, Dang, Nepalgunj, Dhangadhi and Mahendranagar, among others," he said.

According to him, the fuel required for Nepal can be produced from the waste itself. The Ministry of Industry, Commerce and Supplies and the Ministry of Energy should work in this sector by giving special interest.

Not only diesel can be extracted from plastic, furnace oil can also be derived from it by means of various types of chemical reactions.

Senior agriculture officer Kul Prasad Subedi said jatropha can be successfully grown in the Tarai region from Jhapa in the east to Kanchanpur in the west. Jatropha cultivation can be expanded on the lower base of the Mahabharata range as well as in the Bhawar region.

According to experts non-edible oil equivalent to 38.5 per cent can be extracted from the jatropha fruit. This oil can be mixed up to 40 per cent with diesel and used to power machinery, factories, vehicles and tractors etc.

According to him, 200 thousand kilolitres equivalent of fuel can be manufactured if five to 10 per cent of the biodiesel and ethanol is readily mixed. In this way, we can save Rs 20 billion within the country annually. (RSS)