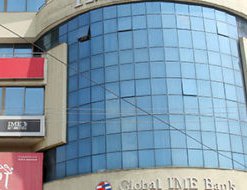 By the end of last fiscal year, the distributable profit of the bank was Rs. 3.199 billion.

The bank has collected a total of Rs. 286 billion in savings and invested Rs. 272 billion in loans in the last fiscal year.

Compared to the previous financial year, the bank's savings and loan investment have increased positively, it said.

The EPS of the bank increased by Rs. 2.63 to Rs. 21.88 during the review period compared to the previous financial year.

During the review period, the bank's paid-up capital increased by 10 per cent. Similarly, the reserve fund has increased by 20.42 per cent.

The non-performing asset of the bank has come down to 1.22 per cent from 1.41 per cent in the last fiscal year.

The bank has 289 branches in all 77 districts of the country.

It has been providing services to more than 2.9 million customers from more than 875 service centres, including 262 ATMs, 275 branchless banking services, 51 extension and revenue collection counters and three foreign representative offices.