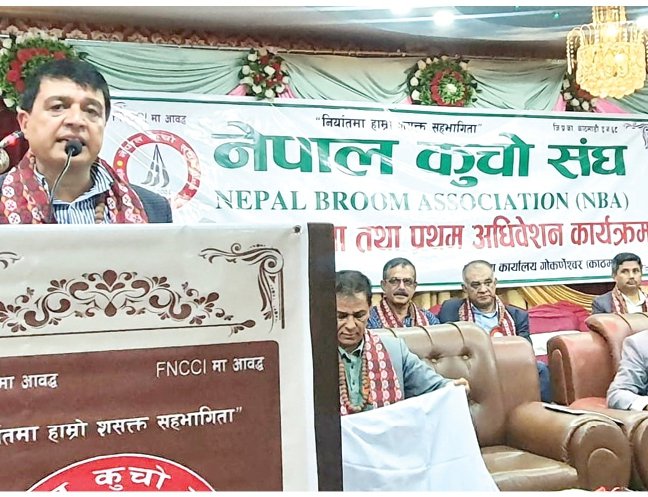 Senior Vice President of the Federation of Nepalese Chambers of Commerce and Industry (FNCCI), Chandra Prasad Dhakal, has said that the export of agricultural products should be increased to solve the problem of foreign exchange reserves.

In the aftermath of the COVID-19, amidst growing imports, the country is facing external sector pressure and a hard time saving and depleting foreign exchange reserves.

Addressing the first Annual General Meeting of Nepal Broom Association (NBA) on Saturday, Dhakal said that the production and export of agricultural produce should be increased to boost the foreign currency accumulation in the country.

He said that he will take initiative as senior vice president of the FNCCI to develop agriculture and solve the problem it has been facing.

"I have heard that goods worth about Rs. 4 billion were exported from this sector formally and informally last year. It needs to be increased," he said.

He requested the NBA to prepare a list of the problems they have been facing and pledged to take up the issues with the private sector and government stakeholders to solve them.

He said that since Nepal is a landlocked country, there is a problem when importing and exporting any item so emphasis should be given to the development of agriculture, tourism, and hydropower.

"If we can focus on only three things like exporting agricultural produce, promoting tourism, and exporting hydropower, Nepal won’t have to rely on the remittance sector for foreign exchange as it is now," Dhakal said.

IFC Appointed Riccardo Puliti As Its New Regional Vice President For Asia And The Pacific By NEW SPOTLIGHT ONLINE 1 hour, 25 minutes ago

Finance Ministry Cut The Budget Of Purchasing Newspapers And Printing Under its Austerity Measures By Agencies 13 hours, 8 minutes ago

MD GHISING Leakage To Single Digit By A Correspondent 5 days, 7 hours ago

NRB'S DECISION Surrounding Controversy By A Correspondent 5 days, 10 hours ago