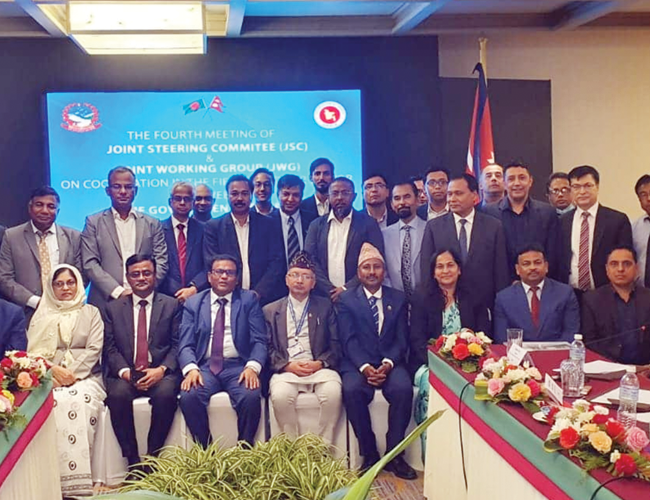 Bangladesh has agreed to purchase about 50 MW of electricity from Nepal immediately. For this purpose, the Indian transmission system will be used to wheel the energy to Bangladesh. The transmission line can flow about 50 MW energy now.

For this, a meeting among the NEA, Indian electricity trading company – National Vidyut Vyapar Nigam – and Bangladesh Power Development Board (BPDB) will be hold to finalise the modality of transmission.

The BPDB has promised to buy and sell electricity within a month for the purchase of 500 MW of electricity of the GMR Upper Karnali Hydroelectricity Project.

Last month, Investment Board Nepal has given a deadline to GMR to complete the PPA within six months and complete the financial management within a year and a half. GMR had been saying that the electricity purchase and sales agreement with the Power Development Board has been reached at the final stage. GMR Upper Karnali Hydropower Company is advancing the process to sell electricity at 7.7 cents per unit.

This decision was taken during the recently concluded the fourth meeting of Energy Secretary Level Joint Steering Committee of Nepal and Bangladesh has been completed with some achievements. The meeting of the committee was held in Kathmandu between the Energy Secretary of the Ministry of Energy, Water Resources and Irrigation (MoEWRI), Sushil Chandra Tiwari, and the Secretary of the Ministry of Energy and Mineral Resources (MoEMR) of Bangladesh, Mohammad Habibur Rahman.

However, Nepal and Bangladesh has decided to sign Agreement on Nepa-Bangladesh electricity trade only after finalizing deal with India. Both the countries say that they could not sign it considering the role of India.

The best option for now is to use the Indian transmission line to take Nepal's electricity to Bangladesh. Apart from this, the construction of another transmission line is also being discussed as an alternative. But both options require positive cooperation from India so the meeting has decided to move forward with India.

MD of Nepal Electricity Authority Kul Man Ghising informed that the meeting has decided that both the countries will continue dialogue with India through their respective mechanisms and to expand cooperation by holding tripartite meetings to realise the electricity trade between Nepal and Bangladesh.

The financial modality of 683 MW reservoir project, Sunkoshi III Hydroelectricity, which Bangladesh wants to invest in, was also on the agenda. But it has been agreed to finalize the modality in the next meeting after the review of the Detailed Feasibility Study (DFS).

"There were extensive discussions about Sunkoshi III in both the joint working committee and the steering committee," he said. "After discussing the report of the project proposed to be made with the investment of the Bangladesh government, the latter will bring a proposal in the next meeting. It has been agreed that the meeting will make the final decision about it."

Spokesperson of the MoEWRI, Madhu Kumar Bhetwal informed that there is an agreement between the NEA and Bangladesh Power Development Board (PDB) to set up a joint company for the construction of the project. Such a company will be established within six months. According to Ghising, there is a possibility that the upcoming fifth round of meetings will be held within the next six months.

According to the feasibility study conducted by the Electricity Development Department, this project will be built at Lubhughat, which is at the border of Khanda Devi of Ramechhap and Temal village of Kavre. A 180 metres high dam will be built there. The reservoir of the project extends 45 km upstream.

The reservoir will be extended above Balefi Bazar towards the Sunkoshi River and upto Sipaghat towards the Indrawati River. Out of 2.356 billion units of electricity produced annually, 622.23 million units will be produced during winter. On Tuesday, the Bangladeshi delegation also made an on-site inspection of the project area.

Based on the news published in The Rising Nepal