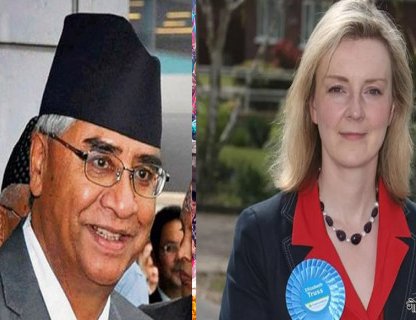 In his message, PM Deuba extended best wishes to Truss for her successful tenure as well as for the continued progress and prosperity of the people of the UK. Stating that Nepal attaches high importance to its relations with the UK as one of the major development partners, he thanked the UK for its valuable support in Nepal’s development endeavours, reads a press release issued by the Ministry of Foreign Affairs on Wednesday.

The PM also recalled his visit to the UK last year to participate in the UN Climate Change Conference (COP26) and stated that given Nepal’s robust commitments to climate action and green development, support from development partners like the UK in the areas of sustainable livelihood, renewable energy and technology transfer goes a long way in realizing these commitments.

Likewise, Minister for Foreign Affairs Dr. Narayan Khadka has sent a message of congratulations to James Cleverly MP, Secretary of State for Foreign, Commonwealth and Development Affairs of the UK.

In his message, the Foreign Minister expressed confidence that Nepal-UK multi-faceted relations would be further strengthened during Cleverly’s tenure in office, according to the statement. (RSS)