Nepal Hosts Mustang Summit To Raise The Issue Of Mountain

Nepal Hosts Mustang Summit To Raise The Issue Of Mountain 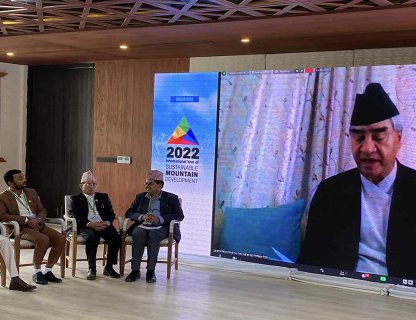 Prime Minister Sher Bahadur Deuba has said that the Mustang Summit will play an important role not only in Nepal but also internationally.

Addressing the International Sustainable Mountain Development Year 2022 Mustang Advocacy Conference organized by the Ministry of Forestry and Environment in Mustang virtually today, he said, "The Mustang summit will be fruitful for the COP-27 conference being held in Egypt. I believe that this conference will play an important role at the international level."

On the occasion, Prime Minister Deuba expressed his hope that the summit will provide an opportunity to prioritize the challenges and opportunities in biodiversity, culture, economic systems of different regions, flora and fauna, etc., in countries like Nepal.

He mentioned that the mountains are not only a natural heritage filled with snow, but also a foundation for providing water to one billion people. Pointing out that there are many problems and challenges in the Dhaulagiri region, Prime Minister Deuba said, "There is a need to urgently address problems such as climate change, damage to biological diversity, soil erosion, pollution, poverty, and inequality."

Organizations such as DCA, FAO, ICIMOD, IUCN and Kirdak, NTNC, UKAID, UNDP and WWF have supported the conference organized by the Ministry of Forests and Environment. The conference will end on Wednesday with the Mustang Mountainous Declaration Wednesday. (RSS)