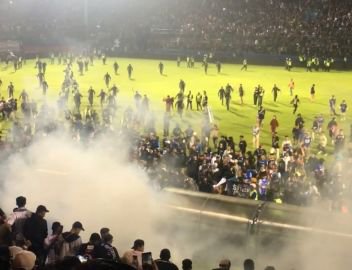 Indonesian police say 125 people have died as a result of chaos that followed a professional soccer match in the province of East Java.

Police say spectators invaded the pitch after a match at a stadium in Malang city on Saturday night. Host Arema FC lost to Persebaya Surabaya.

Police say about 40,000 fans, all of whom were supporters of the losing side, had been allowed into the stands to watch the match. They add that roughly 3,000 of them streamed onto the pitch.

A supporter, who saw the match from the stands and left the stadium before the turmoil developed, said tear gas wafted out of the venue and that his eyes and throat ached. He said he wonders why the riot was allowed to happen.

President Joko Widodo said on Sunday that he hoped the disaster will be the last soccer tragedy in Indonesia. He ordered police to thoroughly investigate security arrangements at the match.

China Partially Lifts Lockdown In Southern City of Guangzhou After Protests By Agencies 14 hours, 49 minutes ago