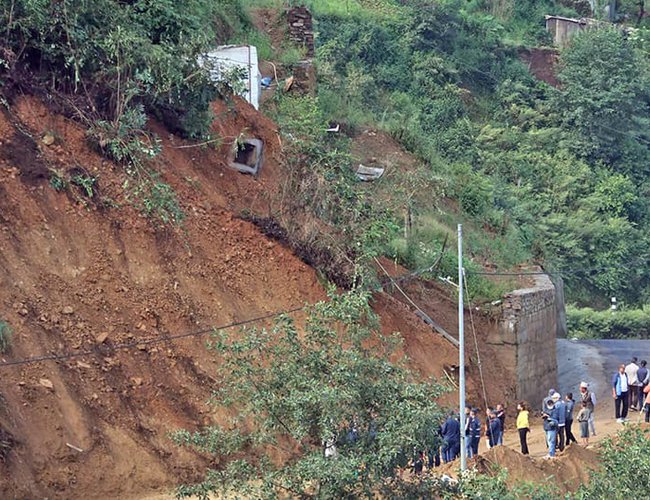 Three persons of the same family have died after their shelter was buried by rain-triggered landslide at Chandragiri, Kathmandu last night. The landslide buried the Dhyan Kendra where they had been sheltering.

The landslip buried the Dhyan Kendra where they had been taking a shelter, said the police. The Kendra is located near Deurali, on the way to Masine in Chandragiri Municipality-2.

The deceased have been identified as 52-year-old Raju Shrestha, his wife Geeta Shrestha, 45, and their 18 months old daughter, Sarathi. All of them were originally from Dhulikhel Municipality-12 in Kavrepalanchok district. The bodies were retrieved from rubbles and sent to the TU Teaching Hosiptal, Maharajgunj, Kathmandu, for a post-mortem, said local people.

Meanwhile, the municipality mayor Ghana Shyam Giri today morning inspected the incident site, and announced the succour to the victims. "Efforts are ongoing to clear the obstructed road so as to avert further losses by the landslide. The municipality has also created awareness in view of the possibility of further risks," he said.

Earthquake In Doti: Nepal Army Is In Rescue Operation, 200 Aftershocks So far By NEW SPOTLIGHT ONLINE 3 weeks, 1 day ago

Earthquake In Sudur Paschim: Six killed In Doti By Agencies 3 weeks, 2 days ago