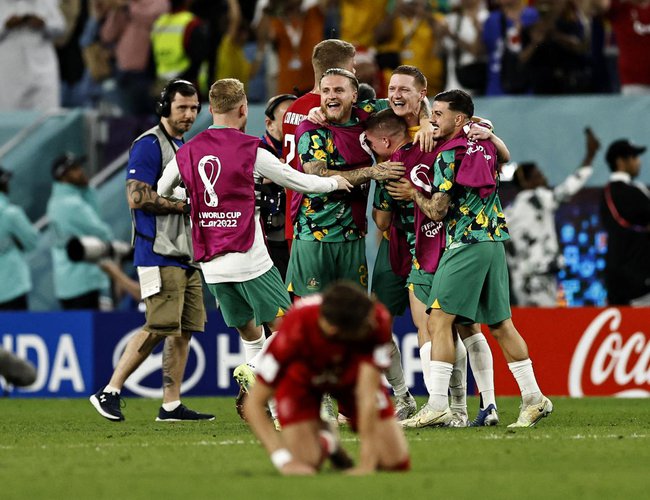 Australia advanced to the round of 16 at the World Cup, beating favoured Denmark 1-0 on Wednesday on Mathew Leckie's 60th-minute goal.

It is Australia's first time in the knockout stage since 2006, the only other time they advanced out of the group stage.

Australia defeated Denmark 1:0 during its group stage match Wednesday, proceeding into the playoff round of the 2022 FIFA World Cup in Qatar. The match took place at the Al Janoub Stadium, attended by 41,232 spectators.

The only goal was scored at the 60th minute by Mathew Leckie.

Qatar is hosting the 2022 FIFA World Cup between November 20 and December 18 at eight stadiums in five cities across the Persian Gulf country, namely in Doha, Lusail, Al Wakrah, Al Khor and Al Rayyan.

The coveted World Cup Trophy will be taken home by one of 32 teams divided into eight groups. The group stage matches are being held across numerous fields in Qatar between November 20 and December 2 with the top two teams from each group advancing to the playoffs.

Qatar won the right to host matches for the 2022 FIFA World Cup on December 2, 2010. The championship kicked off last Sunday with a spectacular ceremony and the subsequent opening match between host Qatar and Ecuador, which ended 2-0 in favor of Ecuador.

In March 2015, FIFA officially announced that the 22nd edition of FIFA’s flagship event would be played in November and December of 2022, with the final match set for December 18, 2022, coinciding with - Qatar National Day. The objective, in principle, was to hold the tournament over 28 days.

On July 15, 2018, during an official ceremony in the Kremlin, Russian President Vladimir Putin passed the baton for the FIFA World Cup’s host country to Emir of Qatar Sheikh Tamim bin Hamad al-Thani in the presence of FIFA President Gianni Infantino.