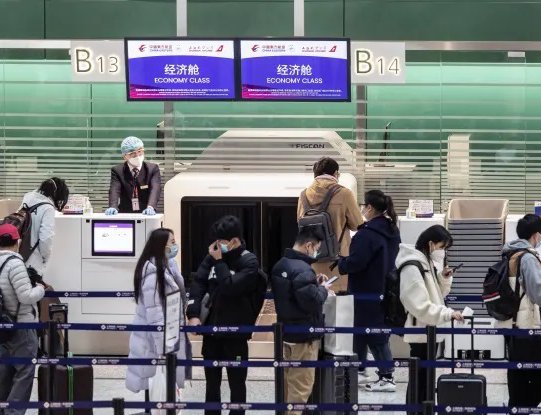 China’s National Health Commission announced late Monday that starting Jan. 8, inbound travelers would no longer need to quarantine upon arrival on the mainland, ending a policy of nearly three years.

Within half an hour of China’s announced policy change, searches for travel abroad surged to a three-year high, according to Trip.com Group.

The U.S. and Southeast Asian countries were among the top 10 overseas destinations with the fastest-growing search volume, the travel booking company said.

Travelers check in for a flight at the Hongqiao International Airport in Shanghai, China, on Monday, Dec. 12, 2022. Chinese officials continued to downplay the risks of Covid-19 as restrictions are eased, with a top medical adviser saying the fatality rate from the omicron variant of the virus is in line with influenza. Photographer: Qilai Shen/Bloomberg via Getty Images

BEIJING — Now that China is set to reopen its borders, locals are rushing to plan overseas travel for the Lunar New Year in late January, according to Trip.com Group.

Within half an hour of China’s announced policy change, searches for travel abroad surged to a three-year high, the travel booking company said.

Japan, Thailand, South Korea, the U.S., Singapore, Malaysia, Australia and the U.K. made the list of top 10 destinations outside the mainland with the fastest-growing search volume, the company said. Macao and Hong Kong also made the list, which did not include any countries on the European continent.

China’s National Health Commission announced late Monday that starting Jan. 8, inbound travelers would no longer need to quarantine upon arrival on the mainland, ending a policy of nearly three years.

Authorities also said they would allow Chinese citizens to resume travel, without providing details on timing or process.

During the pandemic, Beijing prevented Chinese citizens from getting passports or leaving the country unless they had a clear reason, typically for business.

The Lunar New Year, also known as the Spring Festival, is one of the biggest public holidays in China. In 2023, the holiday runs from Jan. 21 to 27.

Nepalese tourism entrepreneurs are waiting to welcome Chinese tourists, saying they have been waiting for them for three years.

The embassies and tourism authorities of France, Thailand, New Zealand, Norway, Spain and many other countries posted messages on Chinese social media platforms, welcoming Chinese tourists to visit in the next year.

The French Embassy in China posted on Weibo on Wednesday to welcome Chinese tourists: "There's no need to quarantine and the border is open. Do you want to come to France?" This was a second day in a row it posted a message welcoming Chinese tourists to France.

France is among the first countries to open its doors to Chinese tourists, and the embassy posted on Sina Weibo on Tuesday saying, "Chinese friends, France welcomes you with open arms."

The tourism authority of Thailand, another favorite destination for Chinese tourists, posted on Weibo that "the magic Thailand has been waiting for you for three years." It has also made a promise with Chinese tourists that they will meet in Thailand in 2023: "be there or be square!"

The Austrian Tourist Board attracts Chinese guests with open-air concerts at the Imperial Palace in Innsbruck and the Salzburg Harvest Festival, where they sing and dance with locals and feast on tasty dishes from farmhouses in the Alps.

China's National Immigration Administration (NIA) earlier announced to resume the processing and approval of passport and visa applications for Chinese citizens going abroad from January 8, 2023 as part of measures to improve immigration management policies, according to a newly released statement by NIA on Tuesday.

The National Health Commission (NHC) issued a notice on Monday addressing the downgrading coronavirus infections management to Class B from January 8, 2023, which proposed to ensure and promote people-to-people exchanges between China and other countries.

"We believe that COVID response measures need to be science-based and proportionate without affecting normal people-to-people exchange," said Wang Wenbin, spokesperson for the Chinese Foreign Ministry on Tuesday, adding that China looks forward to further resumption of personnel exchanges between China and other countries.

Many Chinese netizens expressed their gratitude to these countries for welcoming them and said they would arrange to visit these beautiful places as soon as possible in the coming new year.

"France has a wide perspective that surpasses many other countries, and we also want to welcome French friends to visit China," said a netizen on Weibo. "I have been to France and the beautiful scenery there really amazed me. I hope to arrange a trip to see it again as soon as possible," said another netizen.

"It's hard to imagine that it's been three years and I've almost forgotten what it feels like to travel abroad," said a netizen, adding that she hopes the epidemic can be brought under control as soon as possible so that she can make a happy trip with her family and friends.

According to the Chinese online travel platform Ctrip, the number of searches for visa applications increased by 300 percent shortly after the release of the new policy on Tuesday. At present, the top 10 destinations for Chinese citizens, including Thailand, France and South Korea, have resumed visa services for jobs, tourism, family visits and business.

POKHARA INTERNATIONAL AIRPORT Inaugurated With Fanfare By A Correspondent 1 week, 6 days ago

OPENING CHINA Concern for Nepal By A Correspondent 1 week, 6 days ago

CAAN Has Taken Technical Tests On All ATR Aircraft By Agencies 1 week, 6 days ago