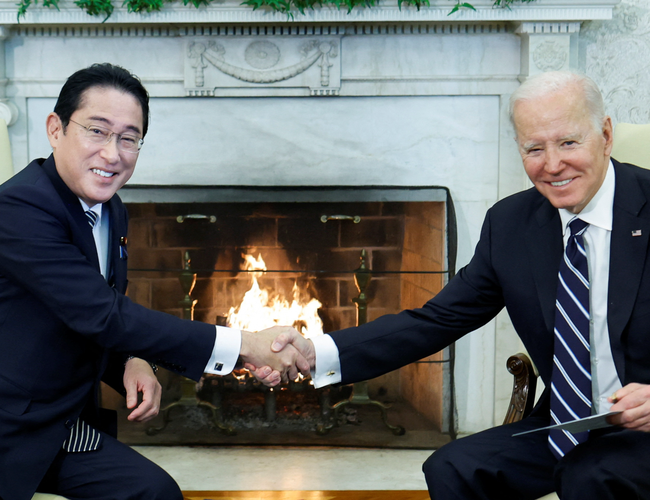 Japanese Prime Minister Kishida Fumio met with US President Joe Biden on Friday in Washington. The two leaders agreed to strengthen the alliance between their two countries, with China's growing assertiveness in mind.

Kishida and Biden spoke for about two hours at the White House.

Kishida told Biden that Japan has undertaken a major shift in security policy.

He explained that the changes, announced last month, include large defense budget increases and the capability to launch counterstrikes.

Kishida also said that the security environment is more severe and complex than ever. He said Japan formulated the new security strategy to contribute to regional peace and prosperity.

And the Japanese leader stressed that Japan can now strengthen the deterrence of their alliance.

Kishida and Biden issued a joint statement after the summit.

It refers to China and North Korea's activities in the Indo-Pacific region, as well as Russia's invasion of Ukraine.

It also says they strongly oppose any unilateral attempts to change the status quo by force.

And it says the two leaders reaffirmed that the US-Japan alliance remains the cornerstone of peace, security and prosperity in the Indo-Pacific.

Kishida and Biden also reiterate the importance of maintaining peace and stability across the Taiwan Strait, and encourage the peaceful resolution of issues in the region.

The two leaders suggest their countries will work together in the fields of economic security, space exploration and energy security via "two-plus-two" talks between their foreign and economic ministers.

Kishida told reporters that he was able to further deepen a personal relationship of trust with Biden.

Biden wrote on Twitter that Kishida has been a "steadfast ally and friend" to the United States.

He also said it was his pleasure to sit down and discuss how they are "stepping up together to advance peace, security, and prosperity" for both countries, the Indo-Pacific, and the world.

Ukrainian Soldiers Arrive In Britain For Tank Training By Agencies 16 hours, 50 minutes ago