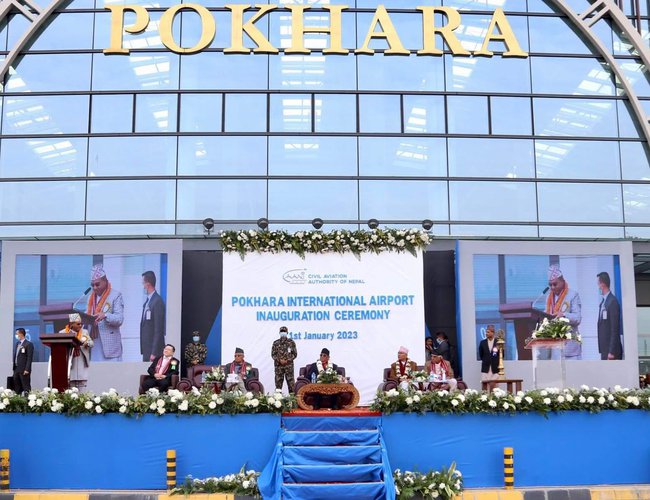 However, Nepal's political leaders, who have bitter personal and political relations, have a consensus on the agenda of building the international airport at Nijgadh as a huge environmental and financial cost.

As building mega projects like airports involve hefty commissions and omissions, it is natural for political leadership to lure to construct the airports. For instance, the land accusation cost of Gautama Buddha International Airport exceeds Rs.50 billion. In Pokhara, along with the loan of over Rs.22 billion from the Chinese Exim Bank, the Nepal government spent over 30 billion for land accusations.

This is the reason Prime Minister Pushpa Kamal Dahal 'Prachanda' has said that the construction of Nijgadh International Airport would be started soon even before the newly inaugurated two international airports are yet to go into operation.

In his first national address, PM Prachanda, who is heading the most unstable rainbow government of seven parties, said that he will talk less in his second tenure. His recent statement showed that he is also a populist leader to issue a ridiculous economically unviable statement. 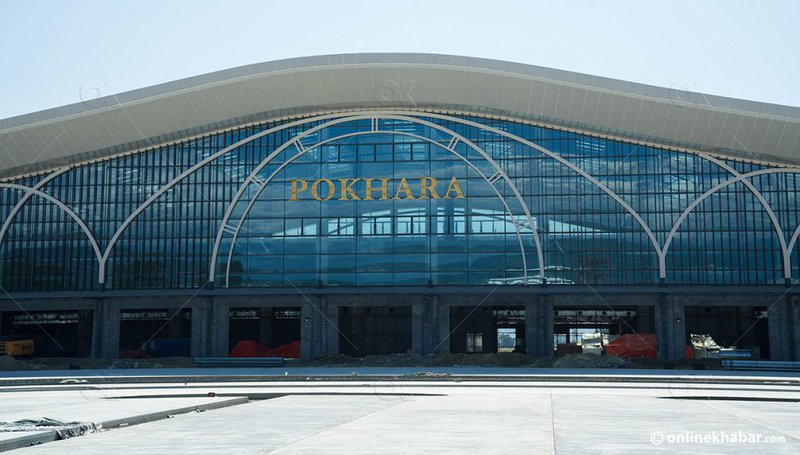 PM Prachanda showed that he does not care about the court order, financial viability and environmental damage. What he wants is mega projects like Nijgadh which will benefit a handful of people.

"With technical hitches, Nepal is baring heavy price operating two international airports using them for domestic flights. In his recent statement PM Prachanda has shown that he seems to have no sense about the financial cost and burden the country is going to face for spending for such a mega infrastructure project," said senior advocate Prakash Mani Sharma. "We are considering filing a case against him," said Sharia, a lead petitioner who filed a case in the Supreme Court.

He said that PM Prachanda's statement was also against the order of the full Bench of the Supreme Court, which directed the government to protect the pristine forest and nature before going to construct a mega project.

"The country's third international airport has come into operation in Pokhara from today, establishing international connectivity to the international sector," PM Dahal said, adding that he had taken initiative for the prompt construction of this airport through the Chinese embassy and in a face-to-face meeting with the Chinese President Xi Jinping.

Stated that Shankar Raj Pathak, the man who conceptualized Pokhara International Airport, is his teacher, and he praised him.

The Executive Chief urged the Chinese government to extend support in the construction of projects including the railway service and in easing trade by opening the transit points.

He viewed that there could not be two opinions that the operation of the international airport in Pokhara will contribute to the economic development of the entire nation, along with that of the Gandaki province.

Premier Dahal reiterated that the government under his leadership will carry out work, taking social justice, good governance and people's prosperity as the main slogan.

"I fulfilled a leading role before this for establishing the democratic republic. Now, I will take the country on the development trajectory through economic development, prosperity and promotion of good governance," he said.

Construction of the national pride project in Chhinedanda, 3km east of the existing Pokhara Domestic Airport, of Pokhara Metropolitan City in Kaski district was completed at the cost of Rs. 22 billion. The project was constructed with the support of China while construction works were carried out by CAMC Engineering Company of that country.

Nepal's Cabinet had awarded the contract to develop the airport to CAMC Engineering as per the recommendation by the Ministry of Culture, Tourism and Civil Aviation while the Export-Import Bank of China provided the loan of US$ 215.96 million. The Ministry of Finance, and Civil Aviation Authority of Nepal (CAAN), the aviation sector regulator in the country, had signed the loan agreement with the Chinese bank.

The test flights at the PIA were conducted a week and a month ago. Thailand's Aero Thai conducted the calibration flight from November 21 to 27.

The construction of the airport was completed in March 2022, and a virtual completion ceremony was organized during the visit of Chinese Foreign Minister Wang Yi on March 26. The CAAN had announced in August that the airport would be brought into operation from January 1, 2023.

Although the ground-breaking ceremony was conducted in April 2016, by then Prime Minister KP Sharma Oli, construction works started in July 2017. The project was expected to be completed by 2020. But various reasons including the COVID-19 pandemic delayed the project. Meanwhile, the Office of the Pokhara Metropolis issued a notice on Saturday announcing the closure of all offices and schools on January 1 and asked all to join the inaugural ceremony of the airport.

Earlier, Buddha Air had announced conducting a direct flight from Pokhara to Varanasi of India, three days a week.

Pokhara International Airport is situated at Chhine Danda, Pokhara Metropolitan city, Kaski, Gandaki Province. It is approximately 3km east of Pokhara's existing domestic airport and 200km west of the capital city of Nepal, Kathmandu. Its elevation is around 800 meters above mean sea level.

According to the PIA, the airport serves as the main gateway for pilgrims and tourists traveling to the famous religious sites, Multipath, Jomsom and Annapurna Round Trek, among others.

The airport is expected to handle one million passengers per year. Its runway is of the ICAO 4D category and is 45-meter wide and 2500-meter long, and runway designation is 12-30, informed the PIA.

The largest type of aircraft expected to use the airport is the B737 series and similar aircraft types.

Meanwhile, issuing a statement, the Embassy of China in Kathmandu said that the PIA is designed and built following the standards of China and the International Civil Aviation Organization (ICAO), which reflects the quality of Chinese projects and symbolizes the national pride of Nepal.

"The new airport not only facilitates personnel exchanges between Nepal and China and other countries but also proves the true friendship and mutual assistance between the two countries in times of adversity," read the statement.

Jubilation in Pokhara, Distress In Lumbini

They called following the weather-induced cancellation of flights at the GBIA has negatively impacted the tourism businesses of Bhairahawa. 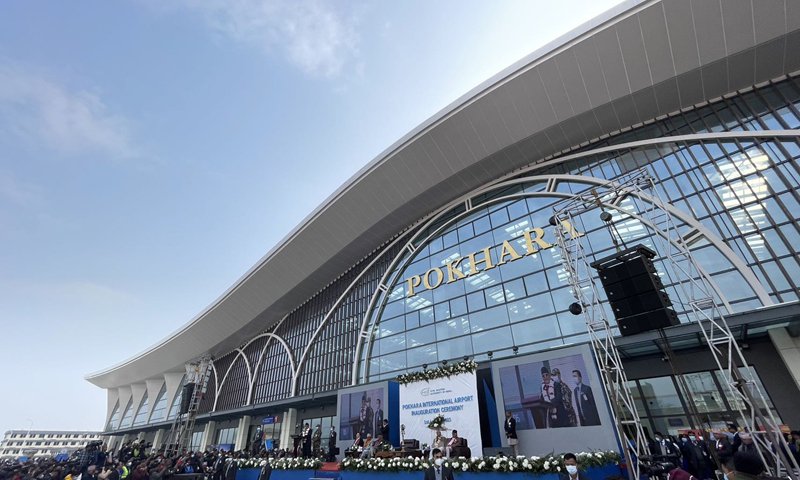 Rachana Pant, first vice president of the Lumbini Province chapter of the Nepal Association of Tour and Travel Agents (NATTA), said that the cancellations, caused by fog and poor visibility, had prevented tourists from making hotel bookings.

"Tourists prefer to come here in January, February and March," she said. "They want to arrive without any hassles and do not like it when their flights are delayed or canceled."

Pant worried that the lack of flights would cause great harm to the businesses reliant on tourist inflow.

Zajeera Airways and Himalaya Airlines, the only two carriers that provide international flights from the airport, have stopped their services completely while domestic companies have not been able to fly as scheduled due to the thick fog.

This need not have been the case though because GBIA is equipped with an Instrument Landing System (ILS) which, according to the airport's Managing Director Govinda Prasad Dahal, can enable planes to land in low visibility conditions. But it has not been brought into operation.

"Because we are an airport located near the border, our ILS will cover the Indian skies as well. So, we need to get permission from India to bring it into use which requires a dialogue at the higher level," Dahal shared.

And the private sector finds the delay in holding this dialogue inexcusable. Bhisma Neupane, president of the Siddhartha Chamber of Commerce and Industry, called it "inappropriate" to not use an already-available technology to facilitate landing at the airport.

Commercial flights to and from Bhairahawa started in 1964 from a grassy airfield. The airfield was upgraded to a domestic airport two years later. In 2015, the government of Sushil Koirala began work on building the international airport which took seven years and nearly Rs. 35 billion to complete reports The Rising Nepal.

As the country's two newly built international airports are facing such a grim situation, the announcement of the prime minister to start the construction of a mega project soon likely to put Nepal into great economic turmoil.