The Children’s Act of 1992 protects the physical and mental development of the Nepalese children. It also outlaws physical abuse and tries to protect children against child labor and the abuses that may come with it. 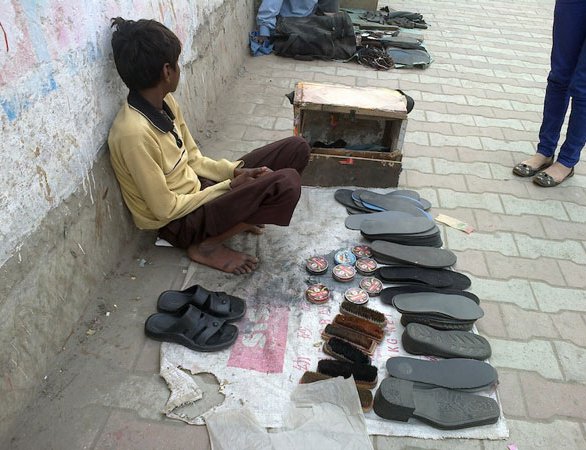 A 12 year-old boy is not officially eligible to work, but Deepak is shining hundreds of shoes at New Road, the heart of Kathmandu, on a daily basis. He is one of a thousand of child laborers.

Originally from Gaur, the district headquarter of Rautahat, a town near the Indian Border, Deepak, on talking to him, offers many perspectives that stand out. His family is obviously very important to him. He left Gaur and came to Kathmandu with a friend in order to support his family. He has three younger brothers and one younger sister. He is determined to work every day, no matter what festivities take place. He taught himself his occupation, fixing shoes and handbags. He works as a cobbler on the sidewalks of New Road. He has worked there for 6 months and claims he lives with his friend.

In Kathmandu, he makes around two hundred to three hundred rupees a day. He cooks for himself. Every month, he sends his family three to four thousand rupees. He says his family is devastatingly poverty stricken.

His father is a cobbler back home, while his mother is a housewife. Neither of his parents has ever been educated. Sometimes the municipality people come and harass him. It is illegal to open a stall on the sidewalk, yet he does it anyway.

He looks up with serious eyes and says, “The worst thing is when the people don’t pay me after I fix their shoes or bags. Sometimes, they force me to fix their shoes and yell at me. They walk away without giving me money.”

Deepak has never been to school. He can only write his first name, in Devnagari script. He is satisfied with his work and says he would rather work than attend school. When asked if he’d go to school if he didn’t have to work, he looks surprised and nods. He would get an education if he were given a chance.

Deepak, an average child laborer in Kathmandu, is only looking to survive while looking out for his family members that live miles away. However, he is still a child. In his free time, he says, he loves to play football in the nearby ground. If he didn’t have to work, he says, he’d spend his days roaming about. Like most child laborers, Deepak never received a formal education. Thus, he is unaware about child labor laws. He doesn’t even know what child labor is.

Ensuring that children like Deepak get to experience their rightful childhood, there are many things the community and the government can do. First and foremost, all children should be ensured a minimum level of education. They can never improve their position in life’s station if they do not get some education. It should be mandatory for children to attend school until at least the 10th grade. By that time, they will have a minimum amount of knowledge of the world in order to survive comfortably.

Thirdly, there should be a place where children can get their basic needs fulfilled. If they are given food, water, and an education, they won’t have to be working until they’re at least 15 years of age. This will have the children become healthier, educated, and satisfied citizens. Since these children are the leaders of tomorrow, our country then our world will improve along with them.

The Children’s Act of 1992 protects the physical and mental development of the Nepalese children. It also outlaws physical abuse and tries to protect children against child labor and the abuses that may come with it. This law states that children that are below the age of 14 are not allowed to work. To work as a laborer, one must be at least 16 years of age.

The Labor Act of 1992 and the Labor Rules of 1993 prohibits minors to take part in hazardous employment. The International Labor Organization (ILO) headed the Child Labor (Prohibition and Regulation) Act of 1999. It amended the mistakes of the 1992 Labor Act. It prohibited children below the age of 14 to take part in any form of employment. The Kamaiya Labor Prohibition Act of 2001 prohibits bonded labor and frees laborers that have been bonded.

The government has made child labor laws in such a way that if followed child labor will be extinct. However, these laws are like the rules of children. Whoever participates in open child labor is ignored. There is no action taken against these criminals. This is where policemen come in. Policemen need to make helping citizens, especially children, their priority. If they don’t make sure that the labor laws are strictly followed, there is no point in them.

However, there is another side to child labor we usually don’t see. The most important and usual cause of child labor is because those children’s parents are so underprivileged that they can’t provide for the family without some economic help.  Thus, they send their children to earn an income, which is desperately needed.  Those parents don’t send their children to work instead of school because they want to, it’s because they have to. The parents love their children very much, that’s the reason they send them off to work. Without the income a child makes, the entire family could face starvation. Instead of having their children go to school and facing hunger, they send the children to work so the entire family can eat. For example, Deepak’s family benefits a great deal from the couple thousand rupees he sends them every month. His siblings are fed and nourished. They have shoes in the summer and jackets in the winter. Even though he has to work long, laborious hours, the welfare of his family improves abundantly.

The topic of child labor needs to be taken more seriously. The government should do something, but it should not be left only to the government to make a change. Us, the citizens, need to take action. There is something every one of us can do to make life easier for these children and their families, and we must do all we can. Helping these children will take a fair amount of our time, money, and thoughts. However, it is absolutely necessary to help them if we want to develop a better tomorrow. A child is a child no matter where or when he was born. He deserves all the cuddling, love, and lessons that we, the lucky ones, take for granted. There is an abundance of frivolous materials and activities that we take part in every day. It is time to go beyond that and make a difference. It is time to go out there and give every possible child the emotional, physical, and mental stability a childhood provides.

Empowering Communities To Improve Quality of Education In Nepal By Keshab Raj Bhatta 1 day, 17 hours ago

IGP GYAWALY Simple Mantra By A Correspondent 3 days, 13 hours ago

DEFENSE MINISTER IN KALAPANI Conciliation or Provocation? By A Correspondent 4 days, 13 hours ago