At a time when mass transport system fails to cater services to the people, Sajha Yatayat launches its services in the valley 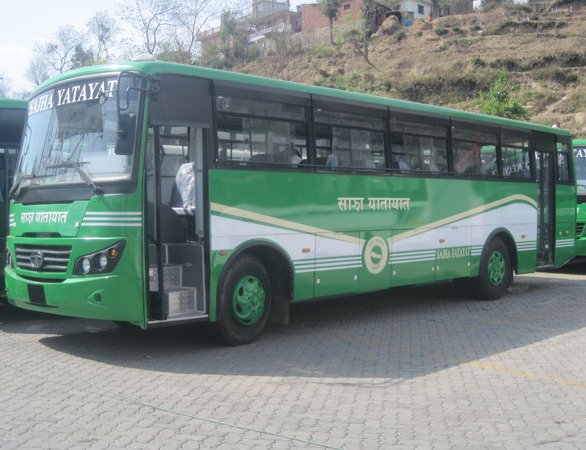 “I heard about Sajha coming back through Kantipur. Now I find it comfortable enough to go around in,” says Madhan Kharel, a passenger riding in one of the large, green buses that have recently been the talk of town.

Sajha Yatayat is not a name unheard of in Kathmandu. As Bhushan Tuladhar, a board member of Sajha Yatayat, says, “It’s an old face with a new identity.”

After 12 years of absence, Sajha Yatayat has returned. It is now large, safe, affordable, and it’s attracting a lot of attention.

The first time the Sajha Yatayat bus service began was in 1961. These buses were green, foreign, and clean. The color of the buses later became blue, and that change started the unraveling of all the changes that were to come. Later on, politics and government meddling’s took their toll, and the bus service came to an abrupt end.

Nearly a decade later, it has returned. This time the service is well organized and the Sajha board is keen about maintaining its quality.  The idea of bringing back the popular bus is not new, says Tuladhar. This was a notion that had been discussed for more than 5 years.

They held meetings and had intuitional elections. They hired new staff and took the effort to train them. The buses are green again, because they want to go back to the original brand and value.

This time around, they are organized and have given themselves a mission. They are not fully dependent on the government. The mission of the Sajha buses is, “to be the leading transport agency providing affordable, efficient, safe mode of urban and interdistrict public transportation services in Nepal and as well as flag-carrier cross border service to regional cities.”

Relieving the traffic jams in the Kathmandu valley is one of their top priorities. The widening of roads has slightly helped the congestion of traffic.  However, with the population to rise above three to four million, it is not adequate.  With more and more people purchasing two wheelers, traffic will continue to get worse.

Tuladhar said currently 40% of people still travelled by foot, while 1.4% used bicycles. Twenty years ago, only 9% of the Kathmandu population travelled by private cars. Today, that number has gone up to 27%. With the population and the number of motors increasing, the traffic will inevitably grow. However, if people use the public transportation system, then there may be a possibility of traffic reduction.

According to Department of Transport Management, there are 800,000 vehicles registered with Bagmati Zone Transport Department. Out of them over 550,000 are two wheelers and they are prone to deadly accidents. The reason behind the rising number of bikes is an unmanageable public transport system.

Sajha seeks to promote environment friendly forms of transportation, like walking. However, for great distances, walking and other such modes are not a possibility.

Owning a vehicle in the Kathmandu valley is more expensive and environmentally detrimental than utilizing the public transport system. However, the Nepali public transport system currently has many shortcomings. Thus, most folks tend to want to purchase their own vehicle.  A cost of two wheelers ranges from Rs.140,000.00 to Rs. 400,000.000 and four wheeler cars ranges from 1 million to 3 million rupees.

Also, there is almost no example of passengers experiencing comfort on a microbus. The conductors let in more people than the bus’s capacity. This leads to a bus that’s almost bursting with an excess amount of people. It is not rare to see a couple of heads pushed on to the glass, as there is not space. Thus, the ride is uncomfortable and unsafe for all involved.  It is also incredibly unhygienic.

The overall population has welcomed the Sajha Buses with open arms. The sixteen buses, which have 55 seats each, have been out for only a couple of weeks and they already have many devoted customers. For example Swastika, a commuter from Kalanki says, “Now-a-days I only ride Sajha. It’s safe.”

The overall reaction of the public has been good. However, every rose has a thorn. The green Sajha thorn seems to be the confusing policies of the price of tickets. From a certain stop to another, there is a specific price ranging from 10-20 rupees. A working woman riding on the Sajha claims that she paid 15 rupees just the other day, and for the same distance she’s paying 20 rupees since. The Sajha stops have not been created yet, so where and when it stops is rather confusing. On a Sajha bus, there are different sections, which are reserved for women and the elderly. However, it seems that nobody pays attention to this.

There also may be a major drawback for the handicapped. The disabled do not have a comfortable space or policy regarding the Sajha currently. However, Tuladhar says that they will obviously get a priority on the buses and they will receive discounts, along with students. He says, regarding the disabled, “No solution that we are confident about is yet in sight, but we are working on it.”

He acknowledges that the disabled have a right to the road space, as much as any abled person.

However, quality must follow quantity. The Sajha buses look rather hygienic and organized when compared to other buses, however how can we ensure that this quality will last? Tuladhar says, “Through maintaining of the buses. We ensure that a cleaning company comes and the buses are managed properly.” They want to make sure that they stick to the mission statement and continue to follow it.

How is the bus different from other forms of public transport? The staff is experienced and the conductors must have gone to school until 10th grade. With that level of education, they are more helpful and courteous. Before working, the conductors are given two to three days of training. Training conductors is a good idea , however, will two to three days be sufficient enough? Shyam, a conductor, says, “We get a few days of training, so we still have a lot to learn.”

There have been several challenges that the bus has faced since coming back. Other than the institutional reform process, and the lack of support on the government’s part, there are a few more. Firstly, the expenses have been of plenty. Each bus has a camera to ensure safety, along with LCD televisions to provide information and entertainment. This does not come cheap. The widening of roads has helped, except in some areas where construction is not finished yet. The lack of street lights has also been a problem as the buses run until 10pm. Nepal bandhs obviously have taken their toll. However, the buses look forward to an optimistic future. As Tuladhar says, “We shall overcome them (the complications) as we go.”

The LCD televisions are something that has been coming up for a while. Recently, there have been a few vehicles with LCD TVs. Sajha, too, has adopted this source of advertisement and entertainment. “It is the first of its kind on board entertainment and infotainment in Nepal for commuters,” says Shourabh, the director of technical operations in the Media Space Solutions Pvt. Ldt.

The buses, however, weren’t created for the sole purpose of entertaining commuters. The Sajha buses were primarily created for the members of our population that cannot afford their own vehicles. Secondly, the Sajha bus wants to focus on the motorcycle owners. If the number of motorcycles on the street decreases, then the streets of Kathmandu would have less traffic and seem cleaner. If the motorbike owners take the bus a couple of days a week, the difference in the traffic would be immense. The environment would also benefit from the reduction of toxic gases.

The board has also a plan on expanding the bus routes at the moment. Their short-term goal is providing Kathmandu with an affordable, punctual, secure, and comfortable mode of transport. They want to establish a systematized system. They will increase the quantity of buses within the capital while maintaining the quality, as currently they only have 16.

Once they have established and preserved a just public transport system in Kathmandu, they may begin to move out side the city. However, Tuladhar warns, this may take a few years. Right now, they are just focusing on Kathmandu’s locals. The establishment will take some time, and the expansion will be timely as well.

If they stabilize the system in Nepal they may venture out into the local bus’s uncharted territory, the neighboring countries. They may have the buses run to Dhaka and Delhi. This is not their current priority, however. This is the long run plan. As Tuladhar said they want to first ‘give Kathmandu the attention it deserves’.

The initial and current routes of the Sajha buses include Kalanki, Kalimati, Tripureshwor, Naya Baneshwor, Sinamangal, Satdobato, Jawalakhel, Tripureshwor, Jamal, the Teaching Hospital, Naya Bes Park and the airport. Once the bus reaches the airport, it waits for 15 minutes before heading onwards.

Twelve years ago, the blue Sajha Buses didn’t work as desired. Back then; it had more liabilities than attributes. A decade later they have come back and taken over. Coming back with more organization, and a confidence that can’t be faked, Sajha has come back strong.

As daily commuter and an airport worker says, “Now-a-days, I always go home on a Sajha bus after a long day.”

The impact the Sajha Bus has made within such a short time frame is enormous, now they must maintain it.

Empowering Communities To Improve Quality of Education In Nepal By Keshab Raj Bhatta 2 days, 21 hours ago

IGP GYAWALY Simple Mantra By A Correspondent 4 days, 17 hours ago

DEFENSE MINISTER IN KALAPANI Conciliation or Provocation? By A Correspondent 5 days, 17 hours ago

VOLUNTEERING Israeli Way By A Correspondent 2 weeks, 3 days ago