With the improvement in facilities like transportation, storage, packaging, and machinery as well as control of pets, Nepal has drastically reduced the post harvest loss. Experiences of Practical Action show that food loss can be minimized through gr 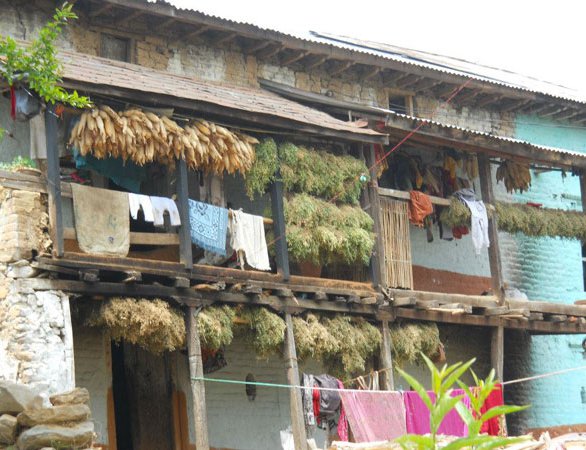 Effective transport facility along with modification in packaging can reduce the loss of food. This is what the farmers in the Hukkilung Village of Gorkha District have shown. After construction of the gravity ropeway to transport the vegetable products, the amount of wastes has drastically gone down as the products can reach the market in the shortest possible time inside improved packaging.

Until a few years ago, the villagers used to spend three to five hours to carry their agriculture products to the market, causing a loss of 20-25 percent of their products during the transport. However, they can now ferry the products in 10 minutes. As Practical Action constructed the gravity ropeway, many farmers in the nearby areas are enjoying the fruits.

This is the reason 32-year old Panamanian Cheeping and his community members are rejoicing. Thanks to the gravity ropeway, constructed under the support of Practical Action, the distance between the village and Prithivi Highway, one of the major highways of Nepal linking capital Kathmandu with the rest the rest of the country, the distance is a non-issue.

“Our experiences in various districts have shown that the linkage of gravity ropeway and improvement in packaging also minimize the loss of agriculture products,” said Sujan Piya, project manager at Practical Action.” Although the objective of gravity ropeway is to make transport easier for marginal and small farmers, it has also helped farmers in reducing their loss.

As there is the lack of modern cold storage facilities in the villages, Practical Action, a leading INGO, is also helping farmers to build the storage through locally available materials. “We installed the gravity ropeway for easy and short transport, but this has given benefits to the farmers by reducing their loss,” said Piya.

Likewise, the access to improved storage has drastically reduced the loss of food products during the post-harvest period. But Nepal's overall food storage system is yet to improve. Annually, Nepalese farmers lose about 25-30 percent of their food products.

According to Post Harvest Management Directorate, under the Department of Agriculture verification, improvement, dissemination and adoption are key factors. After improvement of certain technology like improvement in storage and use of machinery, the post harvest loss is coming to zero.

Its main activity is the post harvest technology generation in perishable (fresh fruits, vegetables and cut flower) and durable commodity (paddy, wheat, maize and legumes) and dissemination of technology to farmers. This includes adoptive research in durables and perishables, integrated stored grain management, Farmers Field School (FFS), construction and distribution of post harvest hand tools and equipment and monitoring of program implementation at the district level. According to the directorate, there is a loss of 25 percent in vegetables, 20 percent in fruits and 32 percent in potatoes and its seeds, according to post harvest studies.

Nepal Agriculture Research Council has been doing research on post harvest. According to NARC, post harvest technology plays an important role in food security and poverty alleviation of the country. It is multidisciplinary in nature and assuming a growing importance to increase food production to meet the requirements of the expanding population. Realizing the importance of post-harvest technology, the Agricultural Perspective Plan for twenty years (2000-2020 A.D) has given due emphasis to the generation and dissemination of post-harvest technology to improve the socio-economic condition of the country.

As the food security is becoming a major challenge in the coming days, the World Environment Day 2013 will be celebrated this year with slogan of Think. Eat. Save. Reduce your footprint.  According to UNEP, the UN Environment Program, the new food-inspired global campaign focuses on the fact that over one billion tons of food are lost or wasted each year.

The campaign, supported by the Food and Agriculture Organization (FAO) and others, aims to reduce food loss along the entire chain of food production and consumption and specifically targets food wasted by consumers, retailers and the hospitality industry.

The World Environment Day (WED) is observed on June 5 every year to promote awareness on the importance of preserving our biodiversity, the need to identify problems related to the environment and ways to take corrective action. It was on this day in the year 1972 that the United Nations Conference on the Human Environment was formed.

Between 1.3 billion and 2.2 billion tons of food is wasted every year due to lost harvests, inefficient storage practices and wastage at retail as well as consumer levels, the United Nations Food and Agriculture Organization has disclosed.

This shows that food insecurity is caused not by insufficient production but by poor distribution and imprudent management of available food. As per the widely accepted definition, food security involves not only availability and access to food but also affordability and fulfillment of the dietary needs of people.

But, imports of food went up alarmingly by 235 percent during the first five months of the current fiscal year compared to the same period last year. Some 27 districts are in food insecurity due to deficit in supplies.

“Government data shows a national aggregate situation of comfortable food security. But we have seen significant incidence of food insecurity at household level due to weak distribution,” said Dr Hari Dahal, a food security expert.”There is also a huge loss in post harvest period reaching up to market.”

In the last 25 years, Nepal suffered food deficits for 15 years and food surpluses for 10 years. “Lack of proper distribution of available food in needy areas also led to food insecurity even during times of food surplus,” said Bholaman Singh Basnet, who has been working in food security sector in Nepal.

“The food insecurity scenario in Nepal is mostly related to reduce production in unfavorable years, areas of production not matching the food deficit areas, access or availability problems in remote areas and lack of cash. Nepal at present produces more than 8.0 million tons of food grains in favorable years. The mountain region which has 8% of the total population only produces 3/4th of its requirement,” said Neeranjan P. Rajbhandari, an expert.

The report shows that worldwide, it is estimated that about one-third of all food produced — worth around $1 trillion — gets lost or wasted in production and consumption systems, according to the Food and Agricultural Organization (FAO). A recent report from the UK’s Institute of Mechanical Engineers put the figure higher, warning that as much as half of all the food produced in the world — equivalent to two billion tons — ends up as waste every year.

According to the FAO, 95 per cent of food waste in developing countries is unintentional loss at early stages of the food supply chain, caused by financial, managerial and technical limitations in harvesting techniques; storage and cooling facilities in difficult climatic conditions; infrastructure; packaging and marketing systems. Per capita waste by consumers is between 95 kg and 115 kg a year in Europe and North America, while consumers in sub-Saharan Africa, south and south-eastern Asia each throw away six kilos to 11 kg a year.

As there is also a growing tendency of food waste, the World Environment Day 2013’s slogan is very relevant and should act as an eye opener for Nepal. Since Practical Action and the government’s  experiences have also shown how to reduce the loss, the question is when will the ideas effectively implemented.