WORLD AIDS DAY: Yet To Pay Off

Despite achieving some success, the efforts at bringing the number of HIV infected people down are yet to pay off 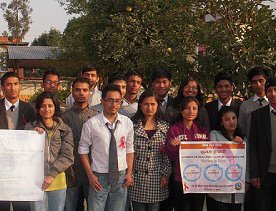 When it comes to celebrating the WORLD AIDS DAY, although the situation is not alarmingly dangerous, it is not a reason to rejoice either. The day’s theme for 2013 is "Getting to Zero - Zero new HIV Infection, Zero Discrimination, and Zero AIDS Related Deaths"  but the data show four to six Nepalese are getting infected with HIV virus.

Experts argue that migration, unsafe sex, and increase of ISD are the reasons behind the refusal for the number of HIV cases to decline in Nepal. Using condom is safe for not getting infected from HIV virus. In the last few years, efforts have been made to supply free needles to the drug users as well. However, these have yet to reach all those who need them. Condom is not available easily for most female sex workers and their clients.

According to the World Health Organization, in 2012, twenty-one lakh teenagers, between 10-19 years were infected with HIV/AIDS. Some 35 million people carry this virus in the world. It has been estimated that 41,110 Nepalese, between 15-49 years are infected by HIV.

However, Nepal has been able to reduce the HIV prevalence rate as one of the 56 countries, which are found to be able to bring down the HIV infection sharply. But recent reports show four to six people are getting HIV infection in Nepal daily.

According to President of Jagriti Women Association Bijaya Dhakal, there are 30,000 registered female sex workers in Nepal, who have been transmitting the HIV. ''Sex workers, injecting drug users, male having sex with male, third gender, migrant workers and their families and prisoners are the most at risk population group of HIV," said participants at an interaction on media sensitization to the issues of HIV/AIDS, organized by Nepal HIV/AIDS Alliance (NEHA).

"The youth should be aware of how to prevent the spread of the disease and learn to treat victims of HIV/AIDS as equals. There are ways to live a normal life in case sufferers receive medical assistance. However, the challenges before us are to overcome the social stigma related to the disease. There are rampant discriminations against the infected people and there is the need to treat them equally," said president of Children for Green New Nepal Bijay Prajapati.

Being well informed about this disease and organizing different programme in the city area are not enough for reducing the number of HIV infected people alone. More than in the cities, effective programmes must be organized in the rural areas, because there are thousands of uneducated people in Nepal, who even do not know what HIV/AIDS is. Unless educated people stop hesitating to give sex education to their teenage children and also make people who are not well-informed about HIV disease aware, the number of infected people will refuse to go down. Female sex workers cannot afford to buy condom for every customer. So, suppliers should sell it for a lesser price by assuring confidentiality so that sex workers or any other infected or non infected people feel nothing awkward about buying it.

Though Nepal is a poor country, but two-fourth people of our country are well-informed about HIV/AIDS. Despite that, in public places, Nepalese stay one step backward to talk about the topic of sex. They do not realize sex education is necessary for their teenage children also.

The recent incidents of declining HIV prevalence rate should give us some sigh of relief. However, the challenges remain in containing the HIV infections. Along with the strong government commitment, there is also the need for involving the concerned stakeholders at all levels.