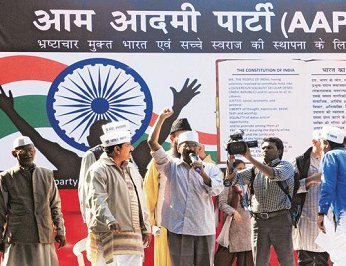 After an overwhelming political debut in the Delhi state elections, newbie Aam Aadmi Party (AAP) is the talk of the town. The Indian politics, primarily dominated by two bigwigs Bharatiya Janata Party (BJP) and  the Congress over the past two decades, suddenly seems to have taken a new turn with the emergence of this debutant party.

Headed by a former civil servant and activist–turned–politician Arvind Kejriwal, the AAP is all set to form the government in the capital after the party decided to accept the Congress' offer of  outside support in the hung legislative assembly.

Whether the AAP's government will last its full 5-year term is anybody's guess given the history of unpredictability of the outside support to a minority government across India. But what has caught the eye of many is the ‘unorthodox’ brand of politics that the rookie party has displayed. Reinforcing its image of being a party that’s different from its established rivals, it has taken a string of unprecedented decisions to the surprise of many.

AAP’s unconventional politics began from its manifesto itself. Rather than making tall claims and promises, the manifesto contained a set of precise solutions the party would offer to the impending problems in the city within a given deadline. The manifesto which addressed pressing issues faced by the Delhiites including soaring power tariffs, water shortage, price rise etc was successful in striking a chord with the public which eventually led to the party's  spectacular poll performance. What was interesting was that the manifesto stated how the solutions would be achieved and offered the logical reasoning behind it. It was a unique move quite unlike its traditional rivals'.

AAP’s unusual brand of politics continued even after the results were announced. After a meeting with the Delhi state governor regarding the formation of government with support from either of the two other parties, the AAP, in a surprising move, sent a letter with 18 conditions to the Congress and the BJP saying it would form government only if the conditions were accepted.  The BJP did not respond but the Congress did without, however, being specific to the AAP's conditions. Under pressure from many quarters to take up the challenge and amidst criticism that it was running away from the responsibility,  the party took another unprecedented move by seeking the opinion of the Delhiites on whether to form the government with Congress support or not.  The party claimed that it was ‘democracy in its true sense’ and a move to involve the people in the decision making process.

The AAP’s  experiments have drawn a lot of skepticisms too.  Whereas many have lauded the party’s decision to involve people directly in the decision making process and go for a more transparent system, it has also been seen as a mere publicity stunt. Political observers say AAP’s decisions are nothing but a clever ploy to show that the party will remain rooted to the people no matter what. Many have criticized the party for riding on political idealism and showing big dreams to people which can not  be implementable.

In this regard, the Jan Lokpal Bill, which was initially promised by the party to be passed within December 29 and now by the end of January, will be a big test. In case of a failure to deliver on other promises within a given time Kejriwal  will have to face flak for shooing away from major issues and only focusing on minor issues from the manifesto like scrapping red beaconed cars and shunning ministerial bungalow.

The question is: how will the AAP's much-claimed  participatory, transparent and clean politics work in India where politics is often seen, as veteran actor Amitabh Bachchan once described, as a ‘cesspool’ characterized as it is by corruption, unprincipled power struggle and influenced by factors such as caste, religion and ethnicity?

Having secured a big win based on a popular plank,  one will have to wait and see if AAP’s unorthodox politics can actually usher in the changes it has promised. Otherwise it will meet the fate of parties such as  R.M Lohia’s  Socialist Party and JP-mentored  Janata Party which despite being popular at the time and despite giving  promise of bringing in true transparency and grassroots democracy in India failed in no time and disappeared quickly from the political scene.