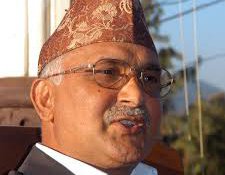 CPN-UML parliamentary leader K.P. Sharma Oli said Indian Prime Minister Narendra Modi was given a wrong briefing upon just arrival to Kathmandu by his officials. Though he did not explicitly mention it, one can guess where his indication is. Normally, ambassador posted in visiting countries gives briefing to his or head of the government and head of state upon his arrival.

In his interview with Sudhir Sharma editor of leading daily Kantipur on December 7, CPN-UML leader Oli said someone gave wrong briefing to Indian Prime Minister Narendra Modi during soon after his arrival. "He (Modi) was given wrong briefing just after his arrival. Thus, he abruptly spoke," said Oli in his interview. "Is writing constitution and making government possible only through consensus or there exist other procedures? Where there any country in the world where only consensus prevail? Are United States of America, England and India running only through consensus or in accordance with constitution and law?" "Thus, promulgation constitution is not an issue of running on the basis of feeing. On the basis of reality and facts, constitution should be promulgated in the fast track," said Oli replying question about recent suggestion of Indian Prime minister Narendra Modi to promulgate the constitution on the basis of consensus.

"We presented all the issue. He did not express differences on our presentation and said alright. He was given wrong briefing. No one is perfect. One should not know everything.  Once understating depends on how is given briefing and report by his nearest and dearest and concerned authorities. When we clarified the issue, he did not issue such statement.

Nepal Is Working With India To Resolve Kalapani Issue By NEW SPOTLIGHT ONLINE 1 day, 5 hours ago