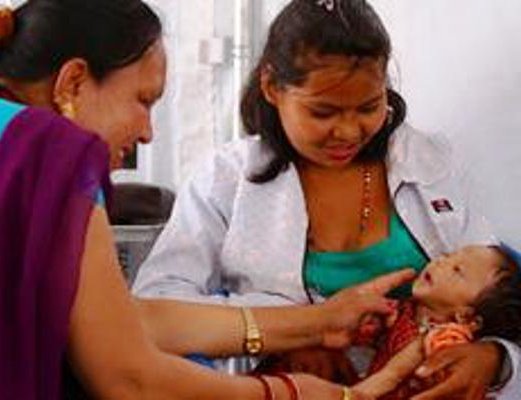 Around twelve babies are being born every hour without access to basic healthcare in the areas of Nepal worst hit by two powerful earthquakes, according to UNICEF, following massive damage to maternity facilities.  The children’s organisation warns that over the next month the lives of almost 18,000 babies and mothers could be at risk, unless urgent action is taken to restore key healthcare systems.

At least 70 per cent of birthing centres across the 14 most affected districts of Nepal have been damaged or destroyed, rising to 90 per cent in some areas.  With surviving facilities overwhelmed, many pregnant women have been left without access to the healthcare they need to ensure the safe delivery of their babies.  Thousands have also lost their homes, leaving mothers without a safe place to stay with their newborns.

“The number of mothers giving birth outside hospitals and birthing centres is feared to have gone up by more than a third in the worst-affected areas of the country since last month’s earthquake hit,” says Tomoo Hozumi, UNICEF’s Representative in Nepal. “The first days of life are the most critical and dangerous for a child – and we are extremely concerned for the well-being of newborns, as well as for their mothers.”

Despite the progress made over the last few decades, access to quality maternal and newborn healthcare in Nepal was still limited even before the earthquakes.  Every day, 38 newborns died largely of preventable causes, and one woman died every eight hours from complications during delivery.  Prior to the quakes, just over a third (38.64 per cent) of mothers in the 14 worst-affected districts gave birth in a recognised health facility, while around three in five pregnant women across the country (59.5 per cent) received antenatal services. UNICEF fears devastation brought about by two major tremors in less than three weeks has further drastically reduced the availability of adequate care.

“As well as vulnerable newborns, pregnant mothers urgently need support as the risks of premature birth, miscarriage and complications rise amid the stress and confusion caused by the earthquakes,” says Tomoo Hozumi. “We expect around 90 women a day to need a caesarean section in the affected parts of Nepal and, at present, the systems cannot cope.”

UNICEF has been working with its counterparts and partners around the clock to help deliver aid to babies and mothers in desperate need, including:

·         setting up dozens of emergency medical tents, including maternity tents, across affected areas.

·         working to establish 22 shelter homes in the worst-hit districts, to care for mothers and newborns when they are discharged from hospital and have no home to return to, as well as offering care to pregnant women with complications.

·         establishing mobile clinics to deliver emergency primary healthcare for vulnerable mothers and children, mainly in areas where health facilities have been damaged or destroyed.

·         distributing hundreds of sets of baby clothes in Sindhupalchok and Gorkha districts.

UNICEF has launched an appeal for more than US$50 million to support its humanitarian response to the earthquake in Nepal over the next three months, as part of a wider inter-agency flash appeal.