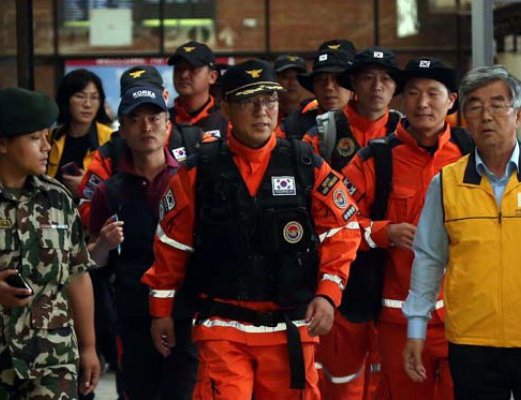 Just a couple of hours after the major earthquake hit Nepal on April 25,Korean journalist Hongkook Kim wasthe first to share the pain of Nepal and express his solidarity.

Hongkook had met this scribe asa participant of the World Journalist Conference in South Korea in the first week of April.A leading journalist, he showed how South Korean citizens are concerned about Nepal.

Tens of thousands of people like Hongkook are concerned about Nepal, too. Like the people-to-people relations, the governments of Korea and Nepal have maintained a close relationship as well.

Soon after earthquake hit Nepal, South Korea’sMinistry of Foreign Affairs  Ministry of Health and Welfare  Ministry of Public Safety and Security  of Republic of Korea sent 27 search and rescue officers in the Korea Disaster Rescue Team (KDRT). They were dispatched to Nepal in two batches on April 27 and May 1, respectively.

After completing the rescue mission in 10 days, the team returned on May 8. The search and rescue team carried out its operations as well as preventive anti-epidemic work, mainly in Bhaktapur from April 28 through May 7.

According to Korean Embassy in Nepal, the medical workers in the KDRT sent to Nepal on May 1 are performing surgeries and other medical services at the Korea-Nepal Friendship Hospital, east of Kathmandu. However, nine medical workers returned home on May 11 as initially planned.

The surgical operations performed by the KDRT in addition to its general outpatient services marked their first kind by a KDRT, representing the expanded scope of medical services to be offered overseas by the Republic of Korea.

Amid the sharp decrease in the demand for medical services in the area where the Korean medical team is working, the ROK government, instead of sending the second batch of ten medical workers, has decided to have six in the first batch remain in Nepal for further services.

The ROK government is drawing up a comprehensive plan for supporting Nepal’s reconstruction and recovery efforts after the emergency relief operations in Nepal are wrapped up.

Along with these supports, ROK is also planning to send more KDRT workers and provide 500,000 US dollars’ worth of goods to Nepal to assist the country to recover from earthquake.

In addition to sending ten search and rescue officers, the government of the Republic of Korea decided to send 32 more emergency relief workers to Nepal on May 1, taking into account the reports on the situation on the ground and recommendations of an advance team, dispatched to Nepal on April 27 to assist the country to recover from the recent earthquake.

Immediately after sending an advance team and the first batch of search and rescue officers on April 27, the ROK government decided to conduct relief operations, in close consultation with the Nepalese government. In particular, the ROK government was able to secure a base for emergency relief operations promptly and effectively by deciding to use the Korea-Nepal Friendship Hospital, built as part of the government’s grant aid projects, as a facility for medical relief activities.

The use of the Friendship Hospital is expected to become an exemplary case of efficiently linking the ROK government’s ODA project with humanitarian assistance.

As the demand for medical services is expected to continue to rise due to increasing number of the injured, the second batch of 12-member medical team (10 medical workers and 2 support personnel) helped a lot even the second earthquake of May 12.

Initially, the ROK government estimated the number of relief personnel to be sent at 40, but decided to expand it to 54, considering the need to send more medical workers following the decision to use the Korea-Nepal Friendship Hospital, as well as the demand for search and rescue workers in Bhaktapur.

Even many Korea based social and charity organizations sent relief materials to earthquake victims in Nepal.

As the Nepalese government and the UN appealed for urgent donations of goods, the ROK government decided to provide 500,000 US dollars in in-kind donations from the 1 million US dollars the government already pledged. The goods wereto be sent to Nepal by a special plane leaving for Nepal on April 30 and a regular flight departing on May 1.

The in-kind donations consist of tents, blankets and other supplies most needed for emergency relief activities on the ground.

The remaining 500,000 US dollars will be donated promptly through international organizations, including the UN and the International Federation of Red Cross and Red Crescent Societies (IFRC).

Melamchi Water To Reach Kathmandu On Saturday, Urged Locals To Cautions By Agencies 2 days, 17 hours ago