By sacrificing their life to save the life of Nepalese earthquake victims, six US Marines have shown their commitment to the cause of humanity all over the world 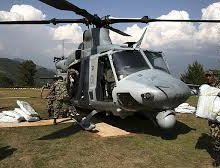 Speaking to media, Marine Lt. Gen. John Wissler, head of the task force overseeing relief efforts in Nepal,said. "Our prayers are with the Marines and the Nepalese soldiers and their families. We all mourn this tragic loss of life."

The helicopter went down in a remote, mountainous region about eight miles north of Charikot, hampering rescue efforts. Wissler described the terrain — about 11,000 feet in altitude — as rugged and forested.

Nepal's defense minister similarly predicted little chance of finding anyone alive. The UH-1Y Huey, missing since May 12, carried six Marines and two Nepalese soldiers when it vanished near Charikot.

"They were courageous; they were selfless individuals dedicated to the international humanitarian aid mission here in Nepal," Wissler said. "We are deeply saddened by the discovery of this wreckage."

Nepal’s prime minister Sushil Koirala also expressed his condolence to the brave soldiers. “All Nepalese are grateful to those American Marines and Nepalese soldiers who died during the rescue mission.”

Nepalese officials reported finding three bodies at the crash site, according to multiple media accounts, but neither Wissler nor a spokesman for U.S. Pacific Command could immediately confirm the claim. If true, a full roster likely will be made public 24 hours after the last of the Marines' next-of-kin are notified.

Officials credit Nepalese forces with finding the wreckage, but could not identify the specific unit that found the site.

Nepal's contribution included three military helicopters, an army battalion, a boat team and a special operations unit. India provided one Mi-17 helicopter for the effort. U.S. aircraft continued to ferry supplies and evacuate the injured even as they searched the region.

"They went to that remote land to help people who suffered devastating losses in the terrible earthquake," he said. "They represent a truth that guide our work around the world: When our friends are in need, America helps. Sometimes those in uniform get attention only when there is a battle, but they do so much more than that [like] looking out for folks who are vulnerable or having a tough time … and it can involve great risk, great sacrifice."

About 300 U.S. service members are participating in what has been dubbed Operation Sahayogi Haat. The term means "helping hands" in Nepali, officials said. They have helped deliver more than 174,000 pounds of relief supplies, transported over 450 victims and carried out 52 casualty evacuations since the 7.8 earthquake rocked Nepal.

The chopper carrying two Nepalese Army personnel and six US marines to deliver aid and relief materials in Charikot and Dolakha, two of the districts most affected by the quakes, had crashed in the mountainous region of Sindhupalchowk, it said.

Melamchi Water To Reach Kathmandu On Saturday, Urged Locals To Cautions By Agencies 58 minutes ago

PPE And Reproductive Health Kits Handed Over To Nepal By NEW SPOTLIGHT ONLINE 21 hours, 33 minutes ago