Constitution Of Nepal 2072: Under Fire

With the promulgation of the New Constitution on September 20, Nepal’s prolonged political transition has come to a formal end, logically concluding the peace process started after a decade of violent Maoist insurgency. 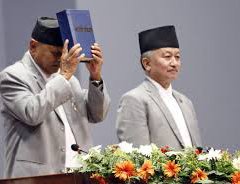 With the promulgation of the New Constitution on September 20, Nepal’s prolonged political transition has come to a formal end, logically concluding the peace process started after a decade of violent Maoist insurgency. However, the new constitution has given birth to another phase of instability and violence as the people living in the southern border, including Thaurs, Madheshis and Janajatis have opposed the new constitution, burning its copy and challenging the long-held expectation that new Federal, Republic and Democratic constitution will bring long lasting peace and stability in Nepal. Despite an overwhelming international support and super majority of CA members behind the constitution, its sustainability has come under question, given the chaos in the Terai-Madhesh.

These lines by Charles Dickens in A Tale of Two Cities aptly describe our  political situation today, nobody knows where Nepal is headed amidst several ups and downs. Leaders of the three parties, Nepali Congress, CPN-UML, and UCPN-Maoist, who got united to promulgate the new constitution, are now looking differently in the context of power sharing.

When president Dr. Ram Baran Yadav promulgated the new constitution from Birendra International Convention Center (BICC), there was joy and happiness inside the hall, where the constitution received a thunderous welcome. The next hour all the students loyal to the three ruling parties celebrated the promulgation of constitution as an historic and life-time achievement.

Political leaders of the three big parties, civil society leaders affiliated with them and students and young political forces showed up in streets with flags and candles. Similarly, business communities welcomed it as an opportunity for an all-round economic development.

UCPN-Maoist leader Pushpa Kamal Dahal thundered that the day made him the happiest in his life as Nepalese people’s long dream to write the constitution through an elected Constituent Assembly got translated into reality.

Leaders of big three parties and their supporters were distributing the sweet dream to their followers that the new constitution would open economic opportunities for them. Having listened for a long time to the false promise that the end of transition would bring economic prosperity in the country, many young people celebrated the occasion as the victory day.

However the situation is violent and dark in the bordering cities. An agitator was killed and three injured in police firing in Birjung, a southern border city where Madheshi parties have been launching the agitation for almost 42 days following the demarcation of provinces.

Despite the use of force and announcement of curfew and prohibitory orders in various district headquarters, the agitation continues to flare up and escalate deep inside Terai.

As Nepal is heading for a festive season next month, the general strike in Terai has created an uncertainty as the market is empty and there is already the scarcity of essential goods, including the petroleum products. With over 40 dead and more than hundred injured, the wound of Terai is deepening.

“September 20 was the darkest day in Madhesh as two young sons of Madhesh got the martyrdom from police firing,” said Sadbhavana Party leader Rajendra Mahato. “Three Brahmin leaders of Kathmandu are killing Madheshis, who are demanding just rights and shares in their own country. “

As people in Kathmandu and other hill cities celebrated September 20 as the day of victory, the entire Madhesh observed it as a black day in its history. When youngsters in capital Kathmandu were lighting candles and praying for a unified country, the Madheshi youth were burning the copies of Constitution of Nepal 2072 throughout Madhesh and threatening to declare the Madhesh plains as a separate country. Youth of the capital were escorted by security personnel granting security. However, youth in terai were fighting with police in the streets.

As the agitation flares up and Indian response to the promulgation of New Constitution chills, leaders of big three are blaming India for the unrest in areas bordering India.

Social media, online and print news sites are full of stories blaming India for the present problems. Even scholars regarded as soft on India are accusing the Indian establishment as a factor in the situation.

UCPN-Maoist leader Prachanda threatened India not to indulge in Nepal’s internal politics. “Nepalese cannot bow down to anybody as they don’t want to sacrifice their pride with India,” said Prachanda.

Out of big three, UCPN-Maoist leader Prachanda is the most vocal, followed by CPN-UML leader and prime minister aspirant K.P. Sharma Oli. The situation is such that Nepal and India are witnessing their official relations at their lowest ebb since the impasse of 1988-1989.

As Nepal heavily depends on India for its economic development, the deteriorating relations with India will harm the common people. “We will talk with India on issues if there are certain misunderstandings between us,” said K.P.Sharma Oli.

Given the ongoing agitation, building pressure from agitators, the plan of the three parties is likely to change in case of early agreement. In case the leaders of the three parties agreed the proposal of the leader of Madheshi Janaadhikar Forum (Loktantrik), who proposed to incorporate the demands of disgruntled parties in bulk as political agenda, there will be new provisions in the constitution and the present power sharing model will be likely to change.

Prime Minister Sushil Koirala will be in New York for two weeks after leaving Nepal on 23 September and the parties in Kathmandu are likely to work on power sharing and accommodation of demands of Madheshis, Tharus and Janjatis through an amendment.

“Since the demands of Madheshis, Tharus and Janajatis are political in nature, one cannot find these addressed looking at the legal and constitutional means,” said Gachchhadar.

Given the nature of the political leaders, it is unlikely that the current unity among the top brass of the three parties will remain intact forever when they will sit across the table to bargain for various constitutional and political positions.

However, none of the constitutions has survived for an adequate time. All the previous constitutions died because of failure of Nepalese leaders to stick to institutions and rule of law. One after another, these constitutions were burnt whenever the opposition felt betrayed.

This time also, similar forces have appeared to threaten the longevity of the constitution. Instead of warm welcome or candle light, the constitution was put in fire on the same evening with blackout in half of the country. This has indicated that the new constitution is likely to face a number of challenges in its implementation.

The process of negotiations has already been initiated by prime minister Sushil Koirala, K.P.Sharma Oli and Pushpa Kamal Dahal Prachanda, who started the initiative by visiting the party offices of two leaders Mahant Thakur and Bijaya Kumar Gachchhadar. Even as 40 days of violent agitation and clashes have already taken the lives of over 40 people, no sign of immediate solution is near the horizon.

Along with Madhesis, Tharus and disgruntled Janajatis, Dalits and Hindu religious groups are opposing the constitution. And the opposition is gradually increasing expanding as the groups join hands with one another to press the rulers in Kathmandu.

In a process for trip rate agreement, India handed over an eight-point memorandum to Rana’s representatives on 8 December 1950 which said that a Constituent Assembly, composed entirely of properly elected members, should be brought  into being as soon as possible to draw up a constitution for Nepal.

After dismissal of 1960 Constitution, King Mahendra proclaimed Constitution of Nepal 1962. Then, Constitution of Kingdom of Nepal 1990 was promulgated and, before long, the Constituent Assembly demand rose again following the announcement of People’s War in 1996 by Maoist Party.

The present Constituent Assembly became possible only after the signing of the 12-point agreement in November 2005 between the seven-party alliance and Maoists in New Delhi through an Indian brokered peace agreement.

It was expected that promulgation of Federal, Democratic, Republic, Secular and Inclusive constitution creates a conducive and peaceful environment in Nepal.

The challenge for the constitution now is to accommodate the left out and disgruntled people, giving them space. Other challenges for the new constitution are to erase the  divisions between hills and Terai on the constitution. With disrespect in the process and promulgation of constitution in Terai, there was celebration in capital Kathmandu and many hill cities.

“After years of political infighting, Nepal has adopted a constitution creating a federal state. But for it to become a success the nation must also tackle issues affecting women and minorities,” said George Vaurgese.

Following years of political deadlock and violent protests, Nepal's parliament approved a new national constitution on September 20 that divides the country into seven federal states, each with three levels of government: federal, provincial and local. This is Nepal's first complete political framework since the monarchy was abolished in 2008.

The country's first constitution written by elected representatives ensures secularism, granting citizens the right to practice any religion. Some of the provisions feature a president with a ceremonial role who will be elected by parliament for a five-year term and a ministerial council elected by the people that will have executive duties.

The long-delayed charter was pushed through by the country's three major political parties. But smaller opposition parties as well as ethnic and religious groups - especially in Nepal's southern plain regions - have rejected the document amid concerns over how state borders should be defined.

They had even announced a nationwide general strike on the day the constitution was going to be promulgated, followed by protests where they would burn copies of the new charter, thus potentially setting the stage for a prolonged conflict.

With the promulgation of the new Constitution by president Dr. Ram Baran Yadav, the Constituent Assembly was dissolved and Nepal entered into a new phase of history. Following the promulgation, the eight-year political transition has come to an end.

As a constitution is a living document, the ruling party leaders must give up their arrogant behavior and show flexibility to incorporate the demands of Madheshis, Tharus and Janajatis so that everybody can have a sense of ownership on it. It is worthwhile noting what T.S.Eliot says in Murder in the Cathedral,

We have suffered various oppressions,

But mostly we are left alone to our own devices,

And we are content if we are left alone.

PM Deuba Received A Telephone Call from US Secretary Of State By NEW SPOTLIGHT ONLINE 22 hours, 14 minutes ago

Ambassador Kikuta Shares The Views With Prime Minister Deuba For Strengthening The Bilateral Relationship Between Nepal And Japan By NEW SPOTLIGHT ONLINE 5 days, 22 hours ago