Despite several formal and informal meetings between big three and agitating Madheshi parties, there is unlikely to see political solution any time soon 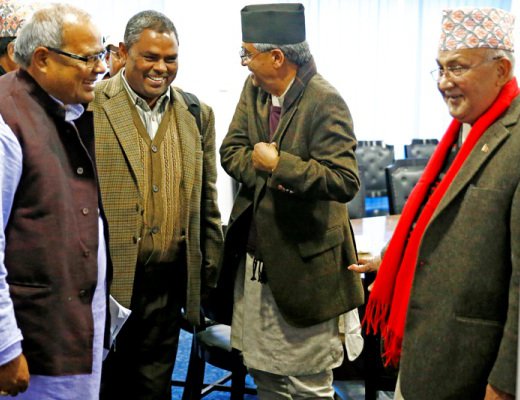 “If big three agree to address our 11 points demand, the current political stalemate will end soon. Given the irresponsible remarks of Prime Minister K.P. Sharma Oli, nothing seems to be possible,” said Mahant Thakur, chairperson of TeraiMadheshLoktantrik Party (TMLP). “We want our demands to be met in package.”

“We are ready to negotiate with Madheshi parties but we cannot accept all 11 points demands,” thundered Prime Minister K.P.SharmaOli. “As this constitution is endorsed by 90 percent of representative of CA, we cannot bow down before  few hundreds of people,” said Oli.” As the bill is on the constitution amendment is in the Legislature Parliament, Madheshiparties needs to cooperate to amend them.”

If these two statements of two leaders of political forces are any indication, there will likely to have more confrontation in coming days. “We have already rejected the bill and we will continue to create the disruption in the Legislature Parliament,” said Thakur.

At a time when people across the country have been suffering from scarcity of essential commodities and the development projects have already standstill with huge loss of money, there is unlikely to see any respite on these issue any time soon.

Amid the opposition in the Legislature Parliament by Madheshi Front, the speaker of Legislature Parliament has order to proceeds the process of amendment of the constitution. “The political settlement is possible only addressing our 11 demand in package, It is unacceptable for us any compromise in piece meal basis,” said Member of Parliament SarbendranathShukla.

Two days ago, leader of Sadbhvana Party RajendraMahato was injured in Police intervention and he is currently treated at a hospital in Biratnagar following sever injury in the head.

“This government is not sincere to the cause of Madheshi people. If the things remain same and leaders of three big parties continue to show adamant, the present agitation may take any turn including the demand for independent Madhesh,” threatened TMLP leader Thakur.

It is reported that CPN-UML leaders are taking hard stand against the demand posed by Madheshis. Not only Prime Minister Oli, even former prime minister and leader of CPN-UML Madhav Kumar Nepal are harsh against Madhesi leaders and their current agitation.

“This agitation is launched by handful of reactionaries and land lords of terai who don’t have any political base. State cannot bow down before handful of people and their violence act,” said Nepal in an interaction program.

With the presentation of constitution amendment bill at the Legislature Parliament, big three parties feel that they have made optimum flexibility to address the demand of madheshi. However, the Madheshi party feels that it is betrayal of big three to the people of Madhesh.

“I have been reputedly saying that our problem is not constitutional but the political in nature. Thus, solution must be found politically,” said Thakur. If three big parties promulgate the new constitution through political agreement, what is wrong to settle Madheshi demand in similar manner.

As two factions continue to indulge in the war of words, common people hope to see the respite is unlikely any time soon.

NCP FEUD Beginning Of End By A Correspondent 2 weeks, 3 days ago