The NAP for the Future 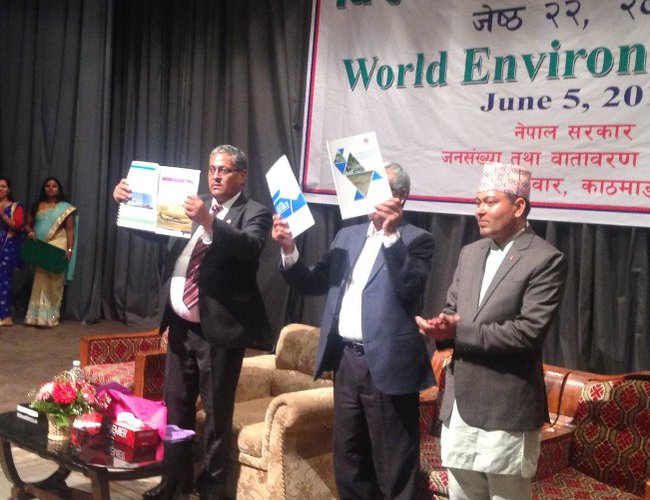 The NAP Global Network tweeted on 15 June 2017 that 'Nepal is a leader' on linking climate change adaptation at national and sub-national levels, and it referred to Dr. Aditya V. Bahadur, Regional Programme Development Manager at Action on Climate Today, Oxford Policy Management, based in New Delhi. Nepal's National Adaptation Plan (NAP) process is closely watched and tracked by the national and international adaptation communities to understand our approaches, use of science and stakeholders engagement. In the past, Adaptation Committee and LDC Expert Group (LEG), the constituted bodies of the UNFCCC, approached Nepal to understand our NAP process. The FAO published a case (Nepal – Building on experiences of LAPA and other adaptation and resilience initiatives) in its recent publication addressing agriculture, forestry and fisheries in NAPs (supplementary guidelines). The IIED's publication on NAP: understanding mandates and sharing experiences also includes Nepal's case. The NAP Global Network and other Adaptation Networks have also shown interest on Nepal's NAP process in particular vertical integration of climate change adaptation (CCA) into climate change sensitive sectors.

Nepal's approach of integrating global processes such as Sustainable Development Goals, Sendai framework on disaster risk reduction and New Urban Agenda (Habitat III) into the NAP process further draws the attention of the adaptation community. Some of the ideas and approaches on Nepal's NAP process were shared in July and November 2016 in Bonn and Marrakech through NAP Expo and Nepal's side-event and exhibition on NAP. In mid-June 2017, Nepal shared her experiences and lesson learned in the regional workshop on NAPs for Asia, organised by the LDC Expert Group in Manila, Philippines.

Nepal is the most climate vulnerable country as evidence-based impacts of climate change have been observed in key economic and social sectors such as agriculture, water resources, forests, health and water supply, and infrastructures. Realizing it, Nepal is implementing most urgent and immediate adaptation options as included in her National Adaptation Program of Action (NAPA) prepared in September 2010 through LAPA framework. As climate change will continue to adversely impact Nepal, she started NAP formulation process to identify and priorities CCA options for the medium- and long-term with a view to reduce vulnerability to the impacts of climate change by building adaptive capacity and resilience, and to facilitate integration of CCA into relevant new and existing policies, programs and activities. Accordingly, Nepal launched the NAP formulation process in September 2015, and mobilized human resources in May 2016 for 13 months for NAP preparation. Parties to the UNFCCC in Cancun, Mexico in 2010 decided to establish a process to enable LDC Parties to formulate and implement NAP, building upon their experience in preparing and implementing NAPAs.

Nepal will build its NAP on experiences and lessons learned from LAPAs, NAPA–prioritized adaptation options and climate resilience programs. The LAPAs, well recognised by the adaptation communities beyond Nepal, are targeted to the poorest and most climate–vulnerable communities with sufficient priority to women in implementing over 2000 adaptation actions in DFID and EU supported 14 districts of mid- and far west Nepal. Lessons learned during the NAPA and LAPA formulation and implementation have been used in the NAP process to promote and ensure people–centred adaptation planning and its integration into ongoing planning processes and participatory implementation.

Nepal started raising awareness on the NAP process since early 2013, developed a road map, organised side-event on NAP in Warsaw, Poland during the UNFCCC conference in 2013, shared initial learning on the NAP process, participated in Asia regional workshops on the NAP process in 2015, conceptualized the approaches for NAP preparation, and expedited the NAP process through learning-by-doing approach. Nepal's NAP process is an implementation of the Climate Change Policy (2011), decision of the Parties to the UNFCCC (2010 and thereafter), Paris Agreement (2015), Nepal's Nationally Determined Contribution (NDC) shared while being a Party to the Paris Agreement (2016) and the ongoing 14th Plan (2016). This country-driven NAP process follows a specific approach with due consideration on the initial guidelines as agreed in Durban in 2011, and the NAP Technical Guidelines prepared by the LDC Expert Group. Nepal's approach is rather unique in engaging multi-stakeholders in the NAP process and builds on the preparation of NAPA and low carbon economic development strategy (yet to endorse by the Government).

Each working group also discussed and agreed on a national framework on climate change vulnerability and risk assessment (VRA), and indicators for VRA.A number of documents have been prepared to advance the NAP process. MoPE has published: (i) synthesis of the stocktaking report; (ii) VRA framework and indicators; and (iii) observed climate trend analysis of Nepal (1971-2014) to the NAP formulation process on the occasion of the World Environment Day (WED, 5 June 2017). These reports were jointly launched by Ministers for Population and Environment or 2017 and 2007 Jay Dev Joshi and Man Bahadur Vishwakarma. This year, President of Nepal was the chief guest of the WED main program. It is good to see Environment Ministers of 1997 (now President), 2007 (now Acting Chair of the Parliamentary Committee on the Environment Protection) and 2017 (current Minister) in the same program. The climate trend analysis report covers 44 years of climate data of Nepal and clearly shows temperature rise at the rate of 0.0560C/year. Climate change scenario analysis is expected to be released soon. Supports from UK-Aid ACT initiative managed by OPML and Practical Action and ICIMOD were instrumental in advancing the NAP process in Nepal. CARE Nepal and WWF Nepal Program have also contributed in organising events. The NAP process is shared in over 50 consultations, meeting, workshops and trainings with nearly 850 participants. Initial experiences were also shared at NAP Expo, UNFCCC CoP session and regional workshops. The Government's 'no one leave behind' approach is working well in engaging more people and institutions in the NAP process.

In a nutshell, Nepal's NAP process has a very good foundation – country-driven and working groups owned process. It is strong, vibrant, and inclusive and is expected to continue extensive consultations during each step of vulnerability and risk assessment, identification and prioritisation of adaptation option, framing adaptation action into a plan, and developing an implementation strategy and monitoring and evaluation framework. Multi-stakeholders working groups have been proved as an excellent platform to share knowledge, information, experiences and learning and get professional inputs. Excellent support, cooperation and guidance from working groups coordinating ministries and leadership from MoPE has encouraged 201 members to contribute to the NAP process. Enhanced networking, coordination and ownership are major strengths of the process. However, challenges lie in consolidating varied understanding and interests of the multi-stakeholders and interest groups in streamlining the NAP process and this could be minimised by continuing the existing consultative process.

As in LAPA, Nepal's NAP process may be a 'flagship' to encourage the regional and international adaptation communities to learn and benefit from Nepal's process, and support Nepal's people-centric adaptation options during its implementation as well. Lessons from LAPA in building NAP, and NAP implementation through LAPA framework would help for horizontal and vertical integration of CCA into climate change sensitive development sectors to reduce climate vulnerability, and build adaptive and resilience capacity of the Nepalese people and ecosystems to climate change impacts. After 13 months, particularly in June, the gear of the NAP process is at 'neutral' and is expected that MoPE will soon change its 'high speed gear'. For this, Government has already accessed USD 2.9 million from the Green Climate Fund and Nepal is expected to make efforts to have this fund to the earliest possible to bridge the funding gap, change the 'gear' and advance the NAP process. The NAP will provide guidance to meet Nepal's medium- and long-terms adaptation needs, and make Nepal's development climate change-friendly, climate-resilient and sustainable.