Despite assurances from countries with Nepali migrant workers, their environment is no longer conducive as it used to be 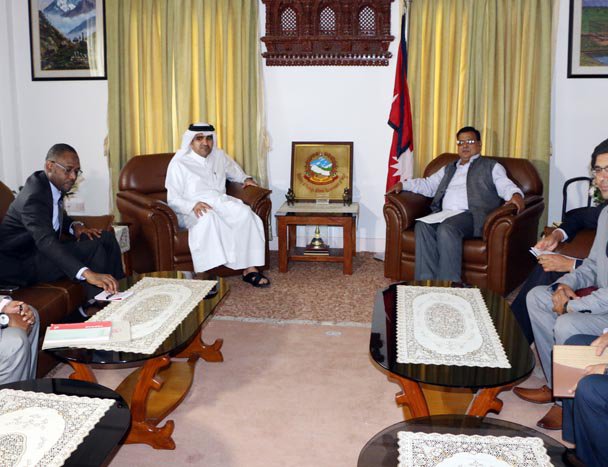 Although ambassadors of Gulf region, including Qatar, Saudi Arabia and UAE have issued assurances to Nepal government that it should not worry about the future of almost half a million migrant workers, working in Qatar, the threat to their jobs remains.

The growing tension in the region will have a major setback to Nepal’s migrant workers. According to Ministry of Labor and Employment, almost over 1.5 million Nepalese are in the Gulf region.

Following the cutting of oil prices, the demand of Nepali migrant workers has already declined in the Gulf. Department of Foreign Employment is receiving few work permit applications in the recent months, particularly from Saudi Arabia and Qatar, two largest destinations for Nepali migrants.

Ambassador of Qatar to Nepal Yousuf Bin Mohammed Al-Hail, in his recent meetings with Deputy Prime Minister and Foreign Minister Krishna Bahadur Mahara and Minister of Labor and Employment Farmulla Mansoor, assured that there is no threat to Nepali migrant workers.

As the flow of remittances continues to decline, Nepal's banking sector, which has been relying on remittances, is facing a severe cash crunch. As there is a shortage of cash, banks are borrowing money with high interest rates.

The recent crackdown on illegal migrants in Malaysia is likely to have impacts on remittances with the future of 40,000 Nepali people there at stake.

The Malaysian government’s recent move against illegal migrant workers may hit Nepali laborers in the Southeast Asian nation, which is among the most preferred labor destinations for Nepali outbound workers. Currently, around 1.5 million Nepali people are working in the region.

With the growing problems in different parts of the region, the World Bank says comprehensive reforms must be made to become lower-middle-income country by 2030.

The World Bank has said that the remittances and outmigration at a large-scale is accentuating existing challenges of the country, which is in 'a low growth, high migration trap'.

"Though migration and remittances have delivered gains for Nepal, it has also compounded the long term-problem of the country," said Damir Cosic, a senior economist with the World Bank.

"Remittances are providing safety net so people do not fall into poverty, but are not being used to leverage rapid growth and greater opportunity," read the report. "Large-scale migration is rapidly, and in many cases, permanently, depleting the country's stock of human capital," it added.

"And, while remittances are helping boost household expenditure. They are doing little directly to improve public service delivery. Consequently, the quality of education, health care, and infrastructure remains abysmal," stated the report.

According to the report, large-scale migration and the ensuing remittances have also contributed to the steady loss of competitiveness (through appreciation of real exchange rate) and have enabled the growth of the low-productivity services.

Out of the total workforce of 14 million, some 4 million (28 percent) are working abroad, an estimate shows.

Melamchi Water To Reach Kathmandu On Saturday, Urged Locals To Cautions By Agencies 1 hour, 14 minutes ago

PPE And Reproductive Health Kits Handed Over To Nepal By NEW SPOTLIGHT ONLINE 21 hours, 49 minutes ago

India Tightens Security At Jamunah Checkpoint In Nepalgunj By Agencies 3 days, 2 hours ago