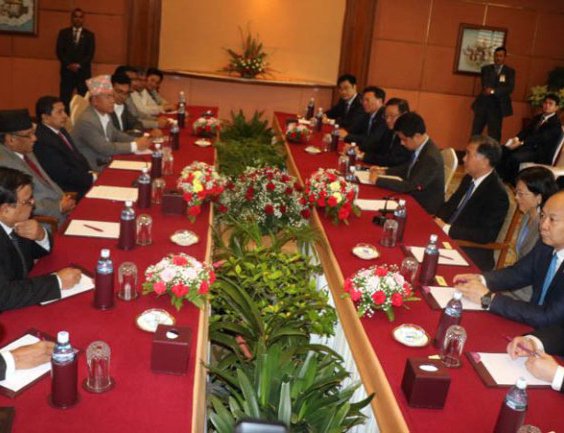 With the signing of Belt and Road Initiative, BRI, Nepal has conveyed the message that it does not want to displease China, its northern neighbor. As China plans to complete the railway track from Shigatse to Kerung near Nepal-China border by 2020, this will open another transit route to Nepal to reach the outside world.

The Framework Agreement on Promotion of Investment and Economic Cooperation seeks to bring in investment from the Chinese private sector for the infrastructure development such as roads, tunnels and electricity transmission lines.

Under the China-Aid Oil and Gas Resources Survey Project, China has announced a grant to conduct a feasibility study on natural gas and petroleum products in mountains, hills and Terai plains, including their survey and excavation.

The exploration of PoL products carries great significance as Nepal has constantly been roiled by shortages as well as blockades of fuel from its southern neighbor. In a friendly gesture, Wang announced 1 million U.S. dollars for the victims of natural calamities in Nepal.

Wang diplomatically nudged Nepal to implement the landmark agreements, including trade and transit treaties reached with China during the premiership of KP Sharma Oli in 2015. Nepal is already a member of the Belt and Road Initiative, a flagship project of President Xi, and Wang said Nepal should be proactive in order to reap the benefits availed by the BRI.

"Wang's visit has set a positive tone for Deuba's visit to China. It can be expected that Nepal and China will ink another vital accord on the railway operation here during his visit," said Hiranya Lal Shrestha, a foreign policy expert.

Although there are many issues, one of the missions of Wang's visit was to keep Nepal neutral on the Doklam standoff. And he is satisfied with Nepal's non-aligned position and One-China Policy. Although India has been trying to bring Nepal within its foreign policy ambit, Nepal maintains its official stance of not siding with any neighbor over the geopolitical impasse.

The move has irked India as it comes just ahead of Nepalese Prime Minister Sher Bahadur Dueba’s visit to New Delhi. Indian experts are of the opinion that China’s ‘cheque-book’ diplomacy goaded lately by ‘early harvest’ thesis of President Xi Jinping’s Belt and Road Initiative has come into full play in Nepal.

“Even before Nepal has come up with any initial estimates on the damage from recent floods China has used the visit by vice Premier Wang Yang to present to Nepal a whole range of aid and investment offers. Most of these are symbolic in either providing instant financial aid (typical Chinese way) or in upgrading road connectivity between Kathmandu and Lhasa or in reconstructing the 17th century world heritage pagoda that was destroyed in 2015 earthquake,” Dr Swaran Singh, Professor at the School of International Studies, at the Jawaharlal Nehru University, told Sputnik. “India is losing goodwill in Nepal after the 2015 blockade, and China could use the simmering discontent since then to its advantage,” adds Singh.

Given the fact that the Himalayan nation is sandwiched between the two Asian giants, historically Nepal has always maintained equidistant outlook towards both. However, relationship between Nepal and India has been rough since Nepal promulgated a new Constitution in 2015.

However, just a day before embarking on an official visit to India by Prime Minister Sher Bahadur Deuba, the Investment Board Nepal has deferred the process of signing a crucial agreement with a Chinese company. The company is reportedly all set to invest Rs. 37 billion in a cement factory in the country.

Although Indians are arguing that Nepal is its special privilege zone, Chinese scholars have been saying, “But in fact, whether in terms of politics, security or economy, Nepal needs both India and China.”