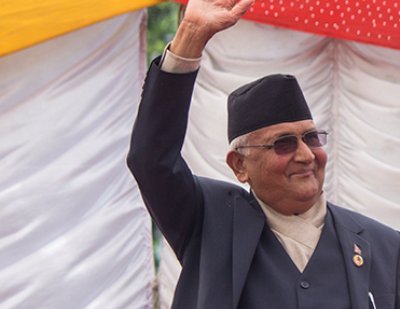 Nepal's Prime Minister K P Oli will make his first trip to India on April 6, keeping the tradition of the Nepalese PM making his first overseas trip to India. What might put a spanner in works is that China, which is close to Oli, has reportedly invited Oli to Beijing on April 8. If Oli has to keep his date with Beijing, he would have to cut short his India trip thereby creating a new set of problems.

According to The Times of India, PM Oli will be given the red carpet treatment, as India scrambles to restore some of its former position in Nepal and re-establish some kind of a relationship with the Nepal PM, who feels much closer to China than India. He will stay at the Rashtrapati Bhavan and is scheduled to be awarded an honorary doctorate by an Indian university.

However, the 2018 budget has seen a 73.33% allocation for Nepal than in the 2017 budget. With Rs 650 crore, India intends to several projects that are ongoing in Nepal. Some of these projects are integrated check posts (ICP) at Birgunj and Biratnagar, railway links from Jogbani to Biratnagar, Terai Roads project, small development projects, Dharmashala at Pashupatinath Temple complex, and Hetauda Polytechnic.

Nepal Is Successful To Contain Spread Of Coronavirus: PM Oli By NEW SPOTLIGHT ONLINE 7 hours ago

Japan To Celebrate May 26 As “Hirotaka Takeuchi 14 of 8000m Mountains Summit Day By NEW SPOTLIGHT ONLINE 11 hours, 45 minutes ago