The use of the Kosi canal for navigation instead of the natural river course would allow Nepal to develop this very important waterway on a par with the waterways that exist in Europe and America that would be suitable for operation of river/sea vessels. 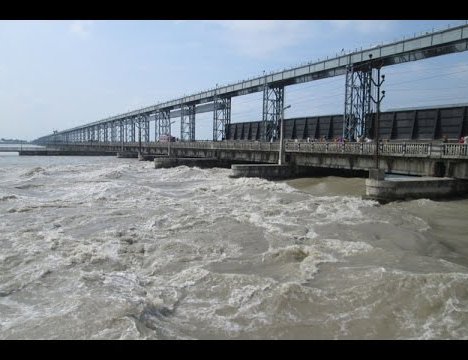 The greatest advantage of the  Kosi Canal Waterway  would be its suitability for operation  of relatively big river vessels that can connect future  river port in Nepal with other neighbouring  coastal seaports also located far away from  the  Haldia  seaport, which is at the terminus of the Hooghly river.  This type of sea-river shipping is prevalent in Europe and other countries.  The  load for transportation must be at least about 1000 ton. The strong advantage of  sea-river shipping is found in its unique connectivity.

Seaport transshipment is not required for sea-river vessels to be able to connect the hinterland  with overseas  destinations. This results in lower transport costs and reduced risk of damage on account of the absence of additional transshipment.  In our case the storage of goods at Haldia or Calcutta port could be avoided. Few cases of sea-river vessels operation in Europe are as follows.

The use of the Kosi canal for navigation instead of the natural river course would  allow Nepal to  develop  this very important waterway on a par with the waterways that exist in Europe and America that would be suitable for operation of river/sea vessels. Some of the major advantages of the canal waterway linking Chatra with Kursella where Kosi merges with the Ganges are  described below:

Decrease in Water Losses  - Withdrawal  of water from the river for irrigation or other purposes would have to be significantly restricted to maintain adequate depths if the natural river channel is to be used for navigation. In case of the navigation canal, the water requirement to maintain adequate depths would be very small. The problem of water losses in the operation of the navigation canal would not even arise if such  canal is to be used as a conveyance system to deliver water for irrigation purposes.

Increased Water Depths - The entry point of the Kosi navigation canal into the Ganges is near the extreme tail end of this river. As a result, the Ganges river channel is sure to be quite deep on this stretch, allowing the operation of relatively large river vessels. Moreover, there might have already been significant improvement in navigability of the Ganges river right up to the mouth of the Kosi navigation canal into the Ganges due to increase  in water  depths after the completion  of the Farakka Barrage. The  Farakka  Barrage reservoir backwater  must  have extended  further upstream along  the Ganges far beyond  the  mouth of  the  Kosi  River.

Layout   of  the  Kosi   Navigation  Canal

According to 1997 Kosi Study Agreement signed between Nepal and Indian Government a detailed study of the Kosi  High Dam would be carried out along with detailed  study of  the navigation canal linking Chatra with the Ganges that would provide our country direct waterway access to seaport. Needless to say the proposed waterway could also be used for river-sea vessels operation.

The Kosi Navigation Canal would be linked with the India’s National Waterway No.1.  This canal  waterway  should  be  planned  on  par  with  the  capacities   adopted  for  the  lower  reach  of   the  Ganges. The proposed Kosi navigation canal can be divided into two reaches. They are  the  45 km  long upper  reach  between  Chatra  and   Birpur ( near  Indo-Nepal  border)  and  the  150 km  long  lower  reach  between  Birpur  and  Kursella on the  Ganges.  The Upper Reach Canal will be entirely in Nepalese  territory.

It has been proposed in the Kosi High Dam Project Report prepared by the Government of India that a north-south canal will be built from Chatra to the Birpur area to deliver  clear water from the Kosi storage reservoir for irrigating land in India to the east of the Kosi  river. This canal would be 130m wide. There is a drop of about 40 metres between Chatra and Birpur. It is proposed in the Indian report that three powerhouses would be build along the proposed canal to utilize the topographical gradient for the  generation  of  electricity.  The capacity of each such power station is expected to be about 100 MW.

The canal proposed to be built for delivering water from Chatra to Birpur for irrigation  and  power  generation   could   also  be used for navigation purposes. The proposed   irrigation canal   is   sufficiently   wide  for use  as  a  navigation   canal.   However, the canal would  require  significant  improvements.    A  navigation  canal   requires   that  adequate  water  depths  be  maintained  in  the  canal  at all  places  and  at all  times.  Similarly, it would also be necessary to  take  into  account  matters related   to  free board, and  the protection of the bank and the bottom  of  the  proposed  canal.  The canal would be needing navigation locks for negotiating the fall   across the powerhouses. There  should be three navigation locks parallel to the powerhouse in the upper reach canal between   Chatra and   Birpur.

Size of Navigation Canal and Locks

The Indian Government proposed irrigation cum power canal between Chatra and Birpur is 130 meters wide.  The  width  of  the  proposed  Kosi  canal   exceeds the minimum size  required  for  its use as  a navigation  canal.   However, the width of the lower reach  Kosi canal could  be  reduced if  it  is  to  serve  exclusively  for  navigation. We might adopt the width of this canal somewhere in the range between 80 m and 100 m. It was the minimum width for I and II classes (topmost)   navigation channels in  the former USSR.. The minimum water depth in the Farakka canal is 4 meters. The same navigation depth could be adopted for the Kosi navigation canal.  Farakka lock has two chambers, each 25.15 meters wide and 187.7 meters long. This dimension could also be adopted for the  Kosi   navigation locks.  The minimum depth of water at the sill might be taken to be 3.5 meters.  Such lock size would permit passage of barges upto 1,500 tons or more in capacity.  It  would   also   be  necessary  to   adopt  the  filling  time  of  the  lock  chambers that  would  determine  the  ultimate capacity  of  the  waterway.

Kosi Canal Waterway Project, which has great economic as well as political significance for our landlocked country, should be treated as inseparable component of the Kosi High Dam Project   whenever it is decided to implement  this mammoth dam project to save the life and properties of millions in North Bihar from long feared devastation resulting due to  permanent change in Kosi river course during very high floods in near future as predicted by  many internationally renowned experts on Kosi.

To realize the full extent of damages resulting from the future floods of the Kosi, a river known as the “Sorrow of Bihar”, we should look at the experience of China’s Yellow River, which is also known as the “Sorrow of China”. According to the article “ YELLOW RIVER: NATION’S SORROW” by XIONG LEI published in CHINA DAILY  on October 16, 1998, keeping the Yellow River at bay has saved the country US$ 50 billion as  a result of construction of large storage dams.

Very recently India’s transport minister Nitin Gadkari has  visited the USA and European countries to get information on inland waterways that could be useful for India’s extensive waterway development plan. At present even France, a country pioneer in the field of canal waterways in Europe, has requested Germany to help to modernize some of its outdated navigation canals. Thus Germany could be the most appropriate country to provide technical assistance in conducting detailed study of the Kosi  Canal  Waterway.