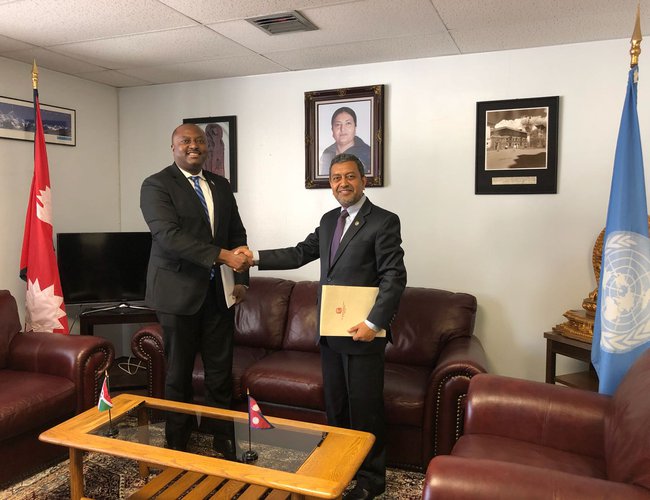 Ambassadors Durga Prasad Bhattarai and Albert Shingiro, the Permanent Representatives of Nepal and Burundi to the United Nations (UN) respectively, signed a Joint Communiqué establishing formal bilateral diplomatic relations between the two countries in New York, today. They also signed a joint letter informing the UN Secretary-General about this development.

On the occasion, the Ambassadors exchanged greetings on behalf of their Heads of State and Government and the Ministers of Foreign Affairs and reflected on how the diplomatic ties become instrumental in further consolidating the foundation of close cooperative relations between the two countries at the UN and other multilateral forums. They also exchanged views on various measures to further deepen and expand the scope of mutual cooperation on a bilateral basis in the future, including under the framework of south-south and trilateral cooperation.

According to press release issued by Permanent Mission of Nepal to the United Nations, both Nepal and Burundi are active members in the groups of Least Developed Countries and Land-Locked Developing Countries, as well as in the Group of 77 and the Non-Aligned Movement. The two countries are currently serving as members of the Human Rights Council in Geneva. Earlier, Nepal and Burundi served together as non-permanent members of the UN Security Council in 1970 and as members of the Economic and Social Council (ECOSOC) in 2002 and 2003, representing the countries in the Asia-Pacific and Africa regions respectively.

Located in the Great Lakes region of East Africa, Burundi has a population of about 11 million in an area of around 27,000 square kilometers, with Bujumbura as its capital. It shares borders with Rwanda, Tanzania, and the Democratic Republic of the Congo to its north, south and west respectively. It is an agricultural country, with coffee and tea making up the bulk of its export trade. Burundi joined the UN on 18 September 1962 following its independence from Belgium. The country endured the trauma of its civil war from 1993-2005 which cost the lives of nearly 300,000 people.

14 Districts Are Under Prohibitory Order In Nepal By NEW SPOTLIGHT ONLINE 2 days, 2 hours ago

India Has Doubled Its Security Forces In Kalapani By NEW SPOTLIGHT ONLINE 3 days, 4 hours ago